Last night, I was sitting at home, relaxing, when I suddenly became aware of someone blasting out the June Carter/Johnny Cash classic, Ring of Fire, somewhere out on the street below. I leaned out my window to see what was going on and discovered it was coming from none other than a London Fire Brigade fire engine driving up the road!

It wasn't my chaps but when I just looked up the latest information on what's going on with the fire stations closure threat, I noticed that there was a public meeting going on last night at Islington Town Hall... and the truck was heading in that direction, just shortly before the meeting was scheduled to start! I reckon it was them blasting it out as a protest song. How awesome are our firemen!?

I'm just disappointed that I missed the meeting. Well, there's still time to comment on the consultation and write disgruntled letters to our buffoon of a mayor. If you love our firemen too (and how could you not after this episode?), you can find out more about the closures and how you can comment here.

Email ThisBlogThis!Share to TwitterShare to FacebookShare to Pinterest
Labels: random reasons to love

It's been a mad couple of weeks since I last posted... But what better way to offset all that than with some croquet in the sunshine on a Bank Holiday Saturday?


I've long had a soft spot for croquet. I first came across it in the classic '80s film, Heathers, and, of course, in Alice in Wonderland. I used to play casually with friends in school and have had a few chances to play in recent years - at Christchurch in Oxford, at a fabulous, rambling, ancient B&B in the Somerset countryside, and at a Diamond Jubilee garden party event in Bedford Square last year.

I learnt that the group who supplied the kit and know-how at the Diamond Jubilee event were called Croquet East, and that they played in Victoria Park every fortnight over the summer. Sadly, I never managed to make it to any of their gatherings last year, due to a combination of circumstances and weather. However, this afternoon I wandered down with a friend to join in, and we had a jolly old time. So I hope to become a regular this year, and would recommend any Londoners to come check it out some time. It really is the most satisfying game, striking just the right balance between civility, fun, skill, strategy... and malice... 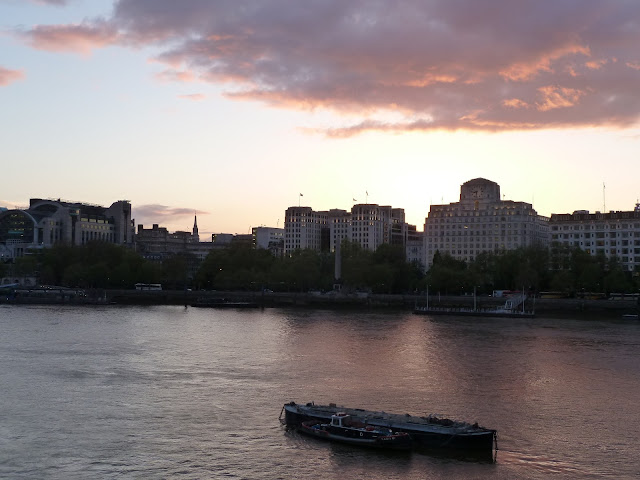 It never fails to give me a small thrill whenever I happen to find myself at Waterloo when the sun is going down. The classic Kinks song always inevitably pops into my head and, if I'm in appropriate company, I sing out the chug-chugga-chugga of the opening bars. 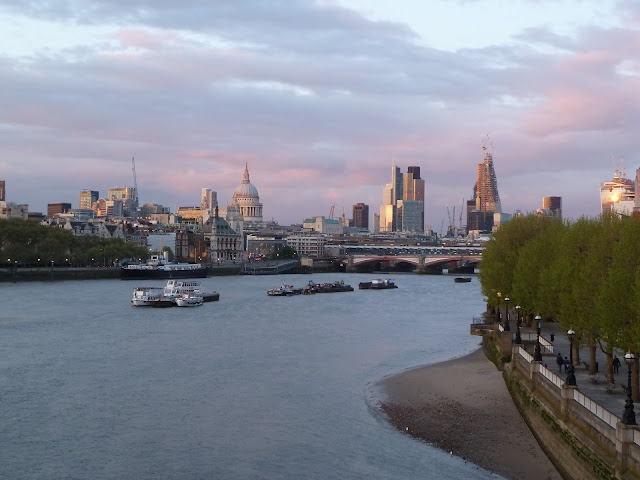 It especially lifts my spirits when I find myself there at sunset upon arriving back into Waterloo Station after a trip away from London. That was the situation last night when I snapped these shots, on my return from a night away and a site visit in Dorset. 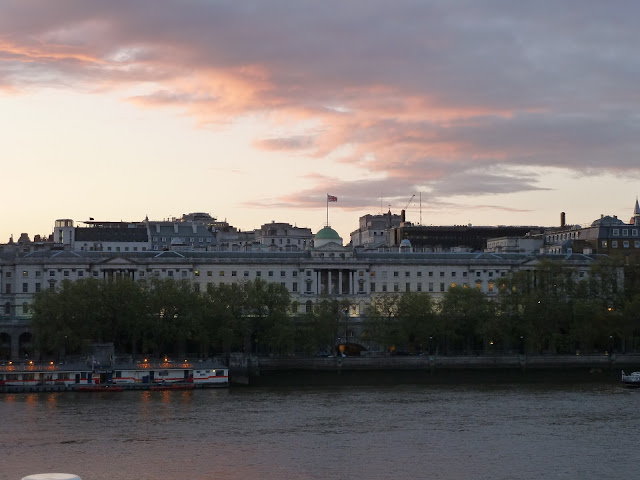 As an architectural historian, I also always find myself working out which of the buildings in the views from Waterloo Bridge would have existed when the lyrics were penned. And indeed, what bridges, as Hungerford footbridge, visible in the view below, wouldn't have been there then... One day, I'd like to sit down and work it all out. Perhaps draw up my own little 1960s view, if I can't find a photograph of one. There's a mission! 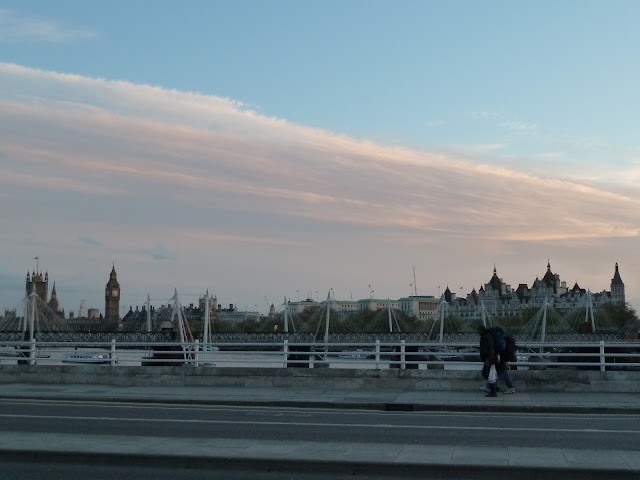 Last night, I was also particularly thrilled by the sliver of a moon resting above Shell Mex House, one of my favourite Thames-side buildings. How can you not love London at moments like this? 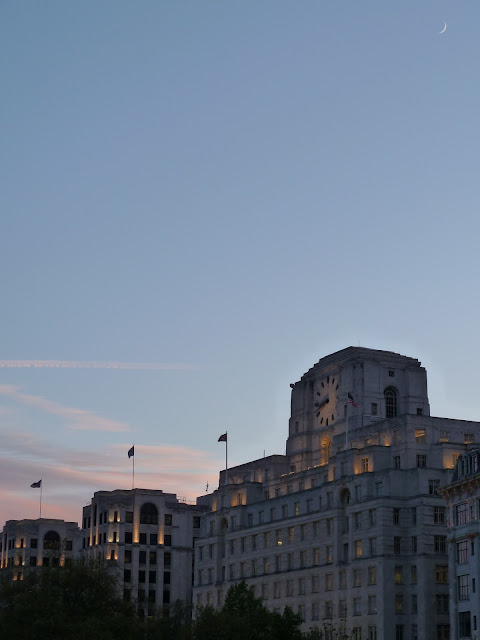 The V&A (and Bowie) Calls for Heels


One of the many reasons I love The Cat is that, when deciding what to wear to the David Bowie exhibition yesterday, I commented that 'the V&A calls for heels' and his response was 'absolutely' - not sarcastically but in honest agreement. Not everyone would concur with that, many would probably suggest flat shoes more appropriate on account of having to stand for so long, but The Cat is on the same wavelength as me.

So we were in agreement that heels had to be worn, but what else? My wardrobe is sadly lacking in 1970s glam wear so I just threw together something fun instead.


And we both thoroughly enjoyed the exhibition. I wasn't convinced by the requirement of headphones at first, because I generally refuse audio guides as I prefer to take things in my own way, go at my own pace, double-back if need be, and share thoughts and observations with whoever I'm there with. But I did get used to the 'audio experience' - there were obviously sensors around the place so that when you came near to a video or display, the audio would change accordingly. In addition, there was music playing over public speakers... If this sounds a little overwhelming and disorientating, that's because it was. But, as I said, I did kind of adjust to it, and the way it worked still allowed you to go freeform. And I was amused when I removed my headphones at one point and a man near me was quietly singing along to whatever was on his headphones...

But what of the exhibition generally? Well, someone, or a group of someones, obviously had a lot of fun putting it together. It certainly wasn't a staid exhibition of displays in glass cases but, rather, very immersive and creatively composed. It moved between the context in which David Bowie grew up, in post-war Britain and moving into the space race; the art, movies and books from which he drew influence to create his unique imagery and ideas; his creative processes and the manner in which he controls all aspects of his albums and shows, not just the music; his various personas and how they came about; his stage shows and music videos; and the ways in which he has influenced popular culture.

The Cat and I were talking afterwards about how we were both trying to imagine what it was like to witness the first emergence of Bowie - the context in which he appeared and how unexpected and different and shocking he was. We pondered what it would have been like to see the famous performance of Starman on Top of the Pops, the iconic and groundbreaking moment which was, for many, many people, the first introduction to Bowie... The thing is, it's still not hard to imagine what an astonishing and exciting moment this was, because his music and image is still thrilling, no matter how used we are to it now.


So if you're in London or can get to London, I absolutely recommend checking out the show. I believe that pre-sale tickets are completely sold out but there are still same-day tickets to be got. Or if you're lucky enough to have a friend who's a member, you could sweetly ask them to take you... I certainly wouldn't mind taking another friend along on my membership card - there was so much to take in, so much footage and such, that a repeat visit would be well worth it.

And, before I go, can I just say one more thing? Thank goodness for this amazing Bank Holiday weather! Springtime and warmth has come at last! Here's to hoping it sticks around. The Cat and I were actually able to enjoy a pleasant stroll after the exhibition, enjoying Hyde Park as the sun and warmth still lingered...

May Day and May Day 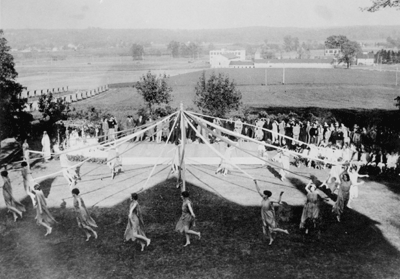 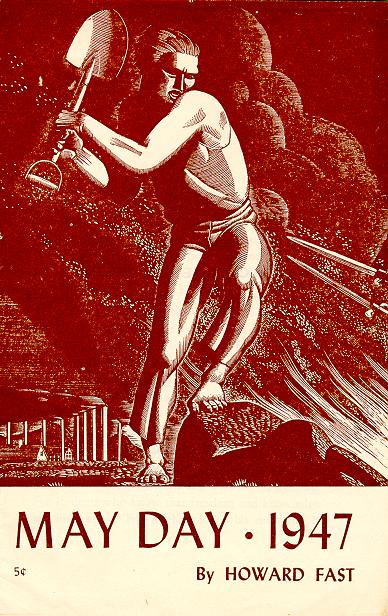 What does May Day mean to you?

I wore bright yellow flowers in my hair but my boss told me I should have been wearing red instead...
Posted by Miss Marie at 22:10 3 comments:

Email ThisBlogThis!Share to TwitterShare to FacebookShare to Pinterest
Labels: holidays, traditions
Newer Posts Older Posts Home
Subscribe to: Posts (Atom)
Love Letter from London is the personal blog of Lisa Marie, an architectural historian who sometimes wonders if she should have been a fashion historian. It recounts various architectural, sartorial and miscellaneous historical adventures and observations...
Read more about Love Letter from London