As I mentioned last week, on Friday I got gussied up and went out for a nice blend of culture and fun at the Guildhall Art Gallery's 1920s-themed night. This is what I cobbled together from my existing wardrobe, for a vaguely appropriate look. 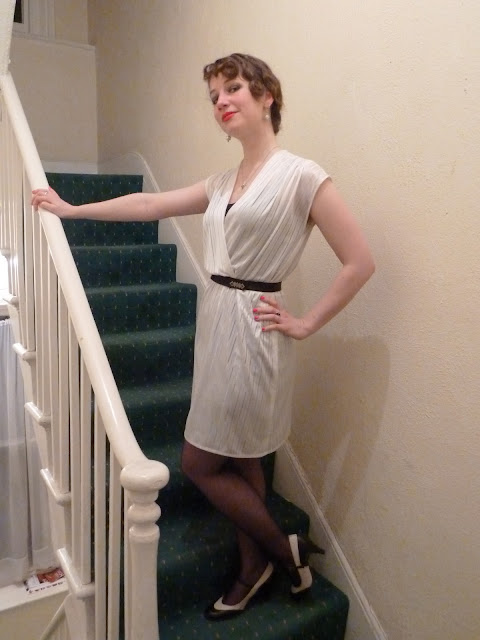 But really, the look would have been nothing without the hair... 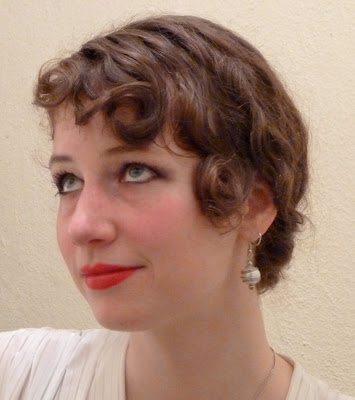 I'm really pleased at how well this turned out!  I think I ought to play with that style more often, especially until I get my fringe trimmed (which is becoming increasingly urgent if I don't want to be blinded, either temporarily by the curtain that is increasingly lowering, or permanently by being spiked with sharp hairs at the perfect length for painfully poking my eyes...). But this was actually dead simple for me, with my curly hair (God bless my curly hair).  The front just required a bit of coaxing and setting with pins as it dried.  One I removed the pins, the curls around my forehead stayed put without assistance and I just needed to pin the longer strands in place as a curl over my ear.  Everything else went into a Gibson roll and, voila!
And here's some shots outside the Guildhall just to prove that I did actually leave the house.


I would take outfit posts outside more often, finding interesting backdrops, but I never like having to remember to take photos when I'd rather be abandoning myself to fun.  Also, there's that awkward thing of being pose-y when there's random strangers about...  But, here, we found a relatively quiet spot on the opposite side of the courtyard from the Art Gallery.


Finally, we had a lovely night inside the gallery.  We perused the Age of Elegance exhibition, which was rather nice but which I wasn't blown away by.  There were some interesting and some pretty paintings in there but I felt that the theme didn't really come through that strongly, except in parts.  Baring in mind that all the pictures were drawn from their own collection, however, you couldn't really expect it to be as comprehensive or coherent as if they'd pin-pointed and borrowed from other collections.  So, it becomes more impressive when considered like that.

And, in fact, I'd like to go back to look at the rest of their collection when I'm not distracted by music, other entertainment and crowds.  It was difficult to focus purely on art with so much else going on!  There was a band in the main gallery with commendable stamina, playing classics and swing.  There were dance classes downstairs but I actually skipped that in favour of getting to look around the paintings at a leisurely pace.  But my highlight was potentially a chap called Mark Oostervan reading a P.G. Wodehouse short story, The Truth About George.  He was great, the story was a brilliant choice, and I was giggling away at all the best moments.

So!  The morals of this story are:
1) If you don't have authentic 1920s in your wardrobe, take the time to get the hairstyle right as that will work wonders in making your outfit more convincing.
2) Consider going to the Guildhall's Age of Elegance exhibition but don't break your neck in a rush to get there.
3) Take out a copy of P.G. Wodehouse's short stories from your local library and have a read.
Posted by Miss Marie at 12:16 13 comments:

Love, love, love this!  Rain on the catwalk! 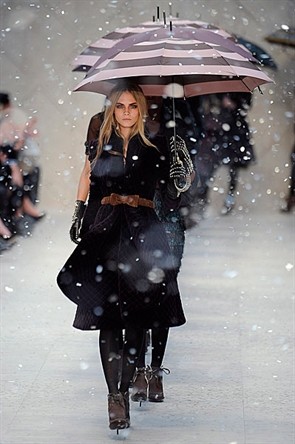 I'm a big fan of umbrellas, rain, and posing with umbrellas in the rain (as evidenced in this post). So, as I was having my evening browse of the the news, I was rather pleased to read about Burberry's staged rain storm at London Fashion Week.  A clap of thunder, followed by "rain" running down the glass walls of the pavilion in which the show was taking place and sparkly rain falling on the cat walk.  Just fabulous! 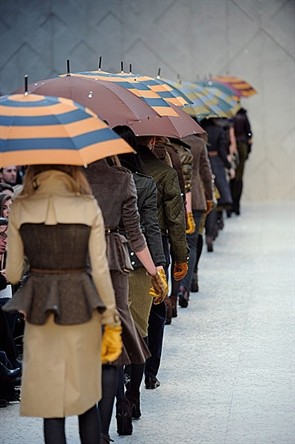 As we're talking about fashion shows, I may as well pick out some of my favourite outfits... 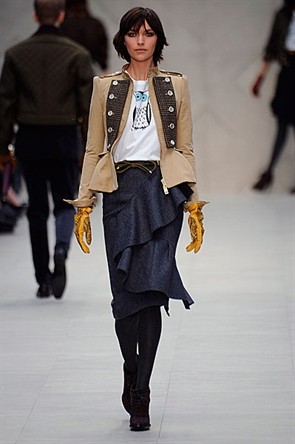 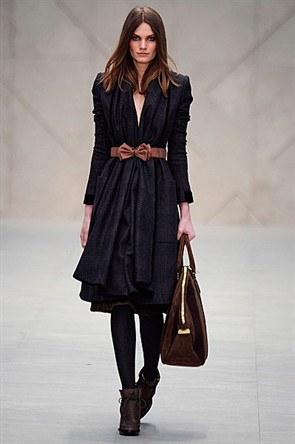 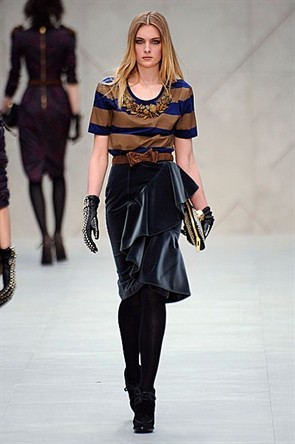 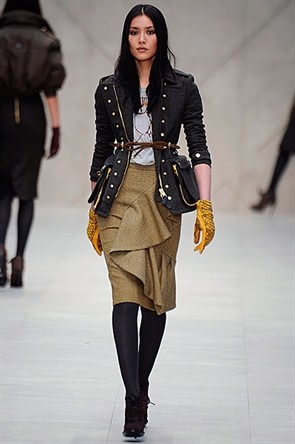 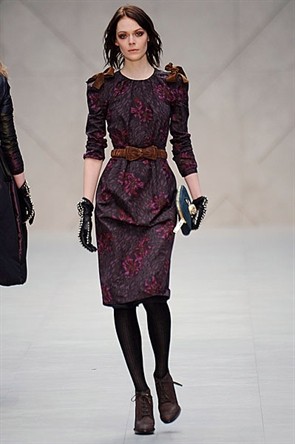 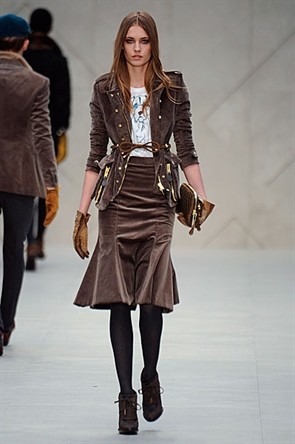 Age of Elegance at the Guildhall

Next Friday, I am breaking my thesis-derived ban on fun to head to the Guildhall Art Gallery's late night opening for their new exhibition, The Age of Elegance. I spotted this ages ago when I was looking up information on their previous exhibition back in November or something, and it's been firmly in my diary since.  Try as I might, Friday nights are never productive anyway (as evidenced by the fact I'm blogging right now), so why not head out on the town?

The exhibition itself is a celebration of the fabulous years between 1890 and 1930.  So much happened between those decades in terms of style and social convention that at first it's kind of hard to see how it will all connect up.  But then when you think about the fin de siecle, Bohemian, wild abandon in the late Victorian era, and compare it to the interwar Jazz Age of Gatsby-esque decadence and luxury, I suppose there are currents which run through...  Something which I expect the exhibition will explore and which I look forward to seeing.


... And then there's the chance to have a little dance and a cocktail or two.  This special, late opening evening has been dubbed The Cat's Pyjamas and promises lots of entertainment in the Jazz Age vein, including a swing band and cocktail bar, as well as more quirky entertainment such as "spoken word cabaret".

Now, all I need to do is decide what to wear.  The temptation to wear 1920s, silky nightwear to play with the Cat's Pyjamas theme is great but I would have to source a new outfit for that.  Instead, I think I'll just have to go with what's in my wardrobe as I won't really have the chance to shop before then.  Unfortunately, my wardrobe doesn't particularly cover this period (love it, but the dresses never seen to suit my figure) but I'm sure I will manage to find something "inspired" by it...  Watch this space!
Posted by Miss Marie at 19:31 7 comments:

As if the Windsor exhibition wasn't enough, now the V&A are having a Diamond Jubilee photography exhibition, featuring Cecil Beaton's mid-20th century photos of Betty and the rest of the royal fam.

Oh, yes!  The Diamond Jubilee joy starts here!  Windsor Castle is putting on an exhibition to celebrate this momentous occasion, which opens today.  It traces Queen Elizabeth II's reign through a series of sixty photographs (one for each year since 1952), showing both official occasions and more candid moments.

Even if you aren't enamoured with the pomp of royal events, think of the vintage appeal that this exhibition will have, particularly in the early years of Betty's reign.  And, if we're lucky, there may even be some photos of her sassy baby sister, Margaret.
It's open until October this year, so there's plenty of time to get along and see it.  And if you can't make it, never fear, as I will report back in a blog post once I've been.  If there's an accompanying book, I may even be tempted to buy that... in which case, there could be some scanning and sharing of the best pics.
Posted by Miss Marie at 14:56 6 comments:

From Your Secret Admirer

Oh no, Valentine's Day is nigh...  That may sound cynical but let me explain.

Now, I love the tradition of secret admirers or taking the brave step of asking someone to be your Valentine. The 14th of February should be a day when you're given the push to approach someone you fancy, sending out a little card either anonymously or with a bold profession and, in the case of the vintage cards below, with a silly little pun to make it seem lighthearted, but with the secret hope that your affection will be returned...
What I don't like is the way it's been turned into a day for people already in couples, a scheduled day of the year in which boyfriends are expected to follow a formula - buy flowers for their girlfriends, arrange dinner for two, etc, etc.  How unromantic to be sat amongst a hoard of couples at a restaurant, with a set menu for expediency and a set two-hour slot so the next couple can fill your warm seats, maximising the profits for the evening (I've worked in a restaurant on Valentine's Day, I know the deal).
It shouldn't be like this!  It should be a day for hopeful singles, for sweet surprises, for nervous confessions, for butterflies in stomachs and (for the lucky ones) for first kisses.
One year, the Cat confessed to me that he considered buying me flowers for Valentine's Day before he remembered my vehement opinions on the matter.  He opted not to and I commended him on his decision.  "Buy me flowers on some random, unexpected day of the year instead," I told him.  "That would be romantic."
So join me in my protest!  Help to reclaim Valentine's Day and to reclaim romance!  If you're in a happy couple, don't buy your boyfriend or girlfriend a Valentine's Day present - surprise them randomly with a special treat on the 9th of February instead (or any other day you choose).  I'm sure you'll get a bigger smile.  And if you're single, send a card to someone who's captured your fancy - try to work up the courage to sign it with your name but if not, sign it with the immortal, wonderful words: "Your secret admirer."
Now, to reward you for making it through to the end of my rant, here's Ella Fitzgerald singing 'It's Only a Paper Moon', a suitably Valentine's Day song.  Enjoy!

Email ThisBlogThis!Share to TwitterShare to FacebookShare to Pinterest
Labels: 1950s, holidays, quirky things
Newer Posts Older Posts Home
Subscribe to: Posts (Atom)
Love Letter from London is the personal blog of Lisa Marie, an architectural historian who sometimes wonders if she should have been a fashion historian. It recounts various architectural, sartorial and miscellaneous historical adventures and observations...
Read more about Love Letter from London