I graduated on Friday! With a distinction! But I must confess I didn't look quite like the above picture... I didn't even get a gown and mortar board, would you believe it? (My university doesn't subscribe to such things, apparently.) And I didn't manage to get any blog-worthy pictures because I was too busy celebrating with my classmates. But I thought I would share my happy news, nevertheless.

Since I found out that I passed, about two weeks ago, I've just been sleeping a whole lot on weekends and going to work, which doesn't make for very interesting blog posts. I will no doubt be back on form soon though. And, in fact, I'm going up to Carlisle this week for work, which is an adventure for me as I've never been to that part of the world. So, if nothing else, I will aim to get some pretty pictures of the town and countryside whilst I'm there to share here. And if anyone knows Carlisle and can recommend a good pub for me and my workmate to kick back at in the evenings, let me know...
Posted by Miss Marie at 21:14 14 comments:

Email ThisBlogThis!Share to TwitterShare to FacebookShare to Pinterest
Labels: 1950s

Ballgowns at the V&A


Recently, I went to see the new exhibition at the V&A Museum - Ballgowns: British Glamour Since 1950. I had been looking forward to seeing this, and when I recently bought membership for the V&A, I decided that this would be my first exhibition with my fancy new card.

There were some delightful dresses and I really enjoyed the way that they had chosen to curate the exhibits. Instead of going chronologically or some other such way, they grouped together dresses by colour palette. It was fun to see dresses from, say, the '50s, '70s and '80s side by side with almost exactly the same shades and combinations of colour.


Naturally, I loved practically all the '50s dress and most of the '60s, but I also found something to like in every era. When I moved up to the present-day dresses on the upper floor I was rather underwhelmed though - somewhat ironically as the dresses there felt like they were desperate to make a statement and grab some attention. But for me they felt somehow soulless. Perhaps because they haven't stood the test of time... Or perhaps because, being modern, it was just like going into Top Shop or some such, which I always find depressing...


Despite all the lovely vintage dresses downstairs, I have to confess that I would have been slightly disappointed if I'd paid to get into the exhibition. It felt rather thin somehow. I think my main complaint would be the lack of interpretation. There was hardly anything to put ballgowns into context or to chart their development - the information boards could basically be summed up in one sentence: "People used to wear ballgowns to debutante balls and other such events, now celebrities wear them on the red carpet". A few select dresses had further information but I felt that so much more could have been said to draw out the viewer's appreciation and understanding of the dresses and how fashions have developed. As it was, it just felt kind of like window shopping... Except I couldn't walk in and try any of them on! I was also frustrated about the lack of mirrors in some of the display cases. There was one amazing 1950s dress with some lovely detailing around the waist - I would have loved to have been able to see how it was constructed at the back and a well-placed mirror would have enabled that. I think such simple measures might have encouraged more overall appreciation of the dresses' structure and craftsmanship.

So, despite some undoubtedly lovely dresses, not necessarily one to hurry off and see. The recently re-opened fashion galley is looking great though. I only had a quick look around the permanent exhibits but will be going back for a proper visit some time. And I will also return with a review of the V&A's other current exhibition British Design 1948-2011 once I've been to that. I've heard good things about it from a couple of workmates so I'm looking forward to it.
Posted by Miss Marie at 22:06 5 comments:

I'm probably the last blogger to say it, but hope everyone had a fabulous Diamond Jubilee weekend, however you celebrated and wherever you are in the world. One of my quiet highlights of the festivities was the flypast on the last day. I was actually working that day but my few colleagues and I who were in the office all climbed up to the fifth-storey roof terrace at 3.30 to see if we could spot the planes flying over on their way to Buckingham Palace. As it turns out, we were directly under the flight path so got to watch as the Dakota and two King Air aircraft flew over, followed by the Lancaster,  Hurricane and Spitfires rumbling over, and then the Red Arrows whizzing over, letting out their coloured trails just after passing us. It was pretty special! Like our own private airshow.

Seeing (and hearing!) the Lancaster is always pretty special for me and makes me a bit emotional because my wonderful grandparents met when my grandfather was flying Lancasters in World War II.


My grandmother enlisted in the WAAF and began as a Telephone Operator in Balloon Command, the unit responsible for controlling barrage balloons. She then trained as a Radio Telephone Operator and moved to Bomber Command, instructing the men up in the planes. Christened Edith, she was a Birmingham girl who trained herself to speak properly and earned the nickname Vicky, as she spoke as well as Queen Victoria.


My grandfather, Ken, also enlisted when the war began. He began training as a pilot in Australia and then completed his training here in England. He was posted to Bomber Command in the RAF, based at Lichfield. He rose to the dignified position of Squadron Leader and bravely flew out on countless operations, from which thousands of men never returned.


Apparently, the two met after my grandfather heard my grandmother's voice over the radio and, rather taken by it, sought her out when his plane was back on English soil. They began dating but had to keep their romance under wraps as there would have been trouble if they were found to be fraternising. 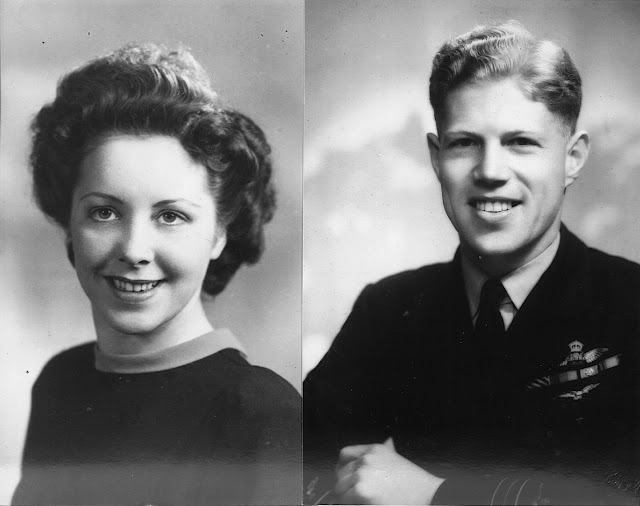 However, they stayed together and, once the war was over, they were married. The rest, as they say, is history, with children and grandchildren, and incredibly full and generous lives which still carry on today, into their nineties. I'm very blessed to be related to such a wonderful, beautiful pair, and to still have them in my life.

And that's why I get emotional whenever I see a Lancaster!

A Decade a Day to the Jubilee: Part 3

The third and final part to the Decade a Day countdown to the Jubilee... I found these two days - the '90s and the '00s - the most challenging, I must say. Both because I don't have much belonging to either decade in my wardrobe, and because it's hard to turn something from such recent times into a distinct outfit. I ended up rather going with my own personal version and experience of these periods... Oh, and I was at work neither day so didn't have anyone to act out female emancipation with, unfortunately.

Firstly, Friday, the 1990s. I was a teenage Brit Popper. As I said in my last post, I no longer have my Doc Martens, which would have really made the outfit. But I did have my Ben Sherman blazer and a little straight denim skirt.

And then, Saturday, the 2000s. For me, this was The Strokes, the Yeah, Yeah, Yeahs, and other such indie rock. So I tried for my best rock chic look. Horizontal stripes, pointy shoes, white belt, red lipstick... I don't own skinny jeans because they just don't work on my thighs ('skinny' becomes somewhat ironic) so I just went with these as the closest thing.


So, that's it. Six glorious decades of Her Majesty's reign in sartorial format. Hope you've all had a smashing weekend, and that those of my readers in the UK enjoy the rest of the four-day weekend!
Posted by Miss Marie at 22:22 9 comments:

Today is the final installment of Eugene Grasset's seasonal ladies, begun nine long months ago.  My favourite here has to be the current month, June.  What do you all think?  Who's your favourite? 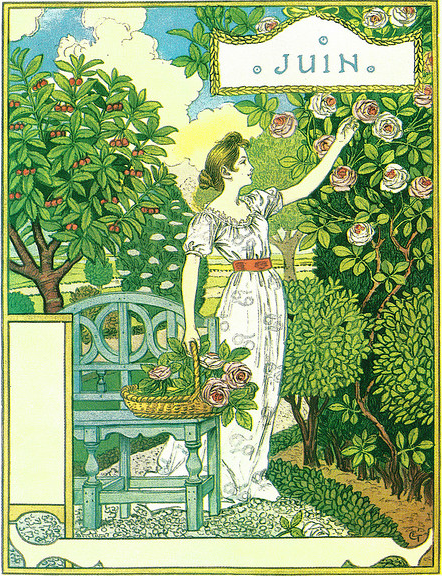 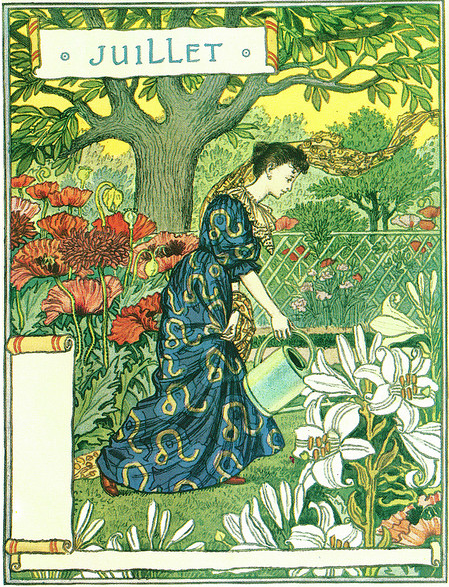 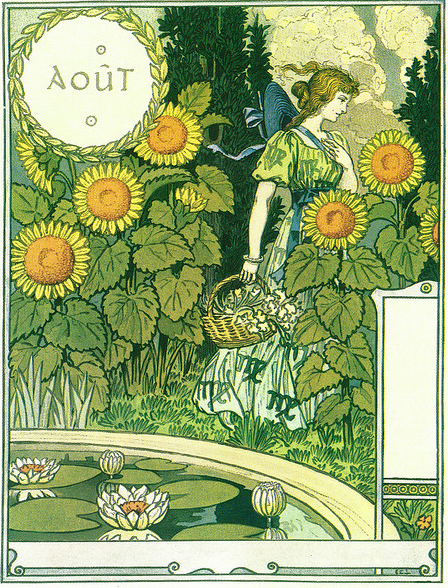 And which has been your favourite season?  Autumn, where it all began?  Rugged up Winter?  Bright Spring?  Or the current season of Summer?

Email ThisBlogThis!Share to TwitterShare to FacebookShare to Pinterest
Labels: artists, design, summer, the Victorians
Newer Posts Older Posts Home
Subscribe to: Posts (Atom)
Love Letter from London is the personal blog of Lisa Marie, an architectural historian who sometimes wonders if she should have been a fashion historian. It recounts various architectural, sartorial and miscellaneous historical adventures and observations...
Read more about Love Letter from London