Komm Mit Mir Fliegen (or Come Fly With Me) 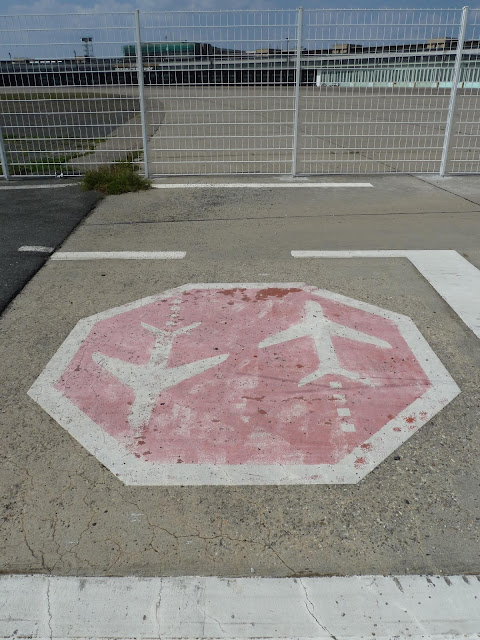 Immediately after getting back from Ireland the other week, my mum and I turned around and hopped on a flight to Germany for more adventures. And, as if we hadn't seen enough airports already, we headed down to Tempelhofer Freiheit. But this is a bit different to your average airport. Tempelhof operated as one of Berlin's airports between the 1920s and 2008, but is now being reclaimed as a public park. 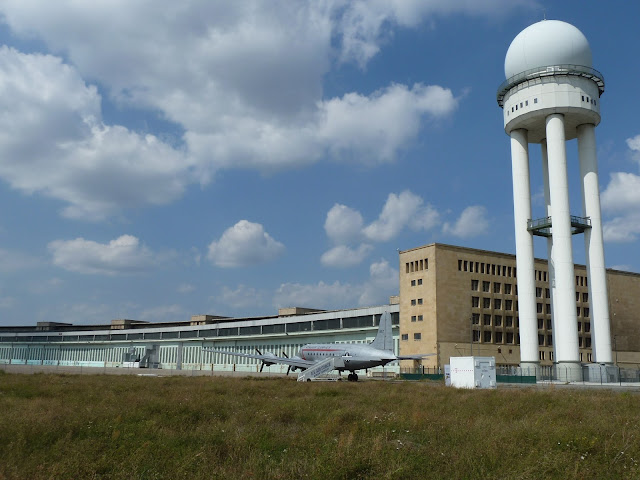 Tempelhof Airport has rather a mixed and dramatic history. It was an official airfield from the 1920s but the original buildings could not meet capacity and the airport was redeveloped under the direction of the Nazis from the late 1930s. In true Nazi style, it was built to awe and impress, forming part of Hitler's megalomaniacal visions for Germania... In fact, it remains one of the largest buildings in the world today, based on sheer volume.


Unfortunately, I do have to confess to rather liking the look of it as a building, despite its nasty associations and origins. Thankfully, the history of Tempelhof was somewhat redeemed by its part in the Berlin Airlift, post World War II, when Allied forces flew in much needed supplies to the people of West Berlin when the Soviets had blockaded the city.

It later reopened as a commercial airport but was eventually closed less than a decade ago.


Though I must say I'm disappointed never to have flown into Tempelhof as a visitor to Berlin, it is great to see that the site had found such a positive new use, as a public park. I was disappointed to be literally fenced off from the airport building itself on our visit there, but I guess I'll just have to return to Berlin on a weekend next time, when they conduct tours of the interior of the building.

In the surrounding park, the runways remain, as generous paths for walkers, cyclists and skaters. 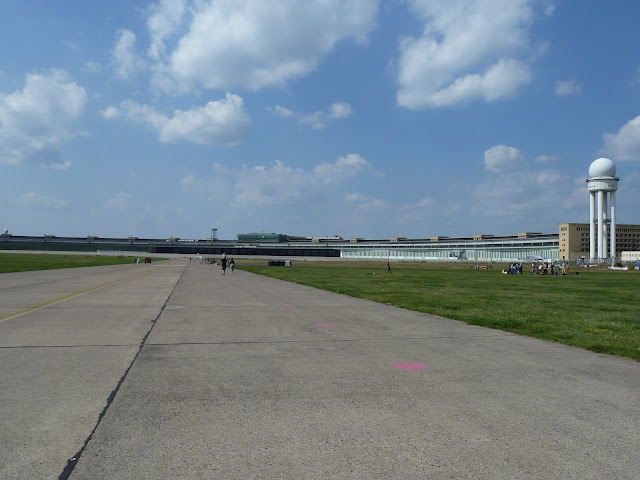 Away from these concrete strips, you can also enjoy a more shaded, leafy and wild park experience: 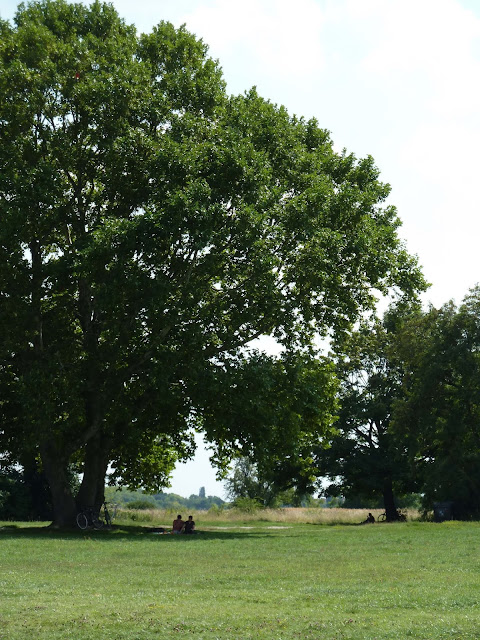 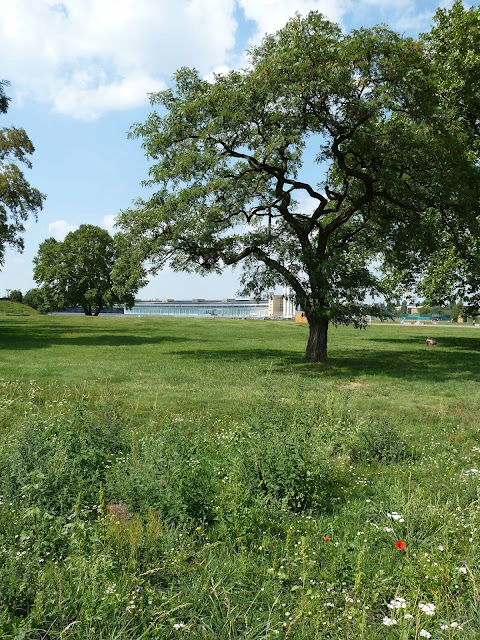 There's also some wonderful community gardens and art spaces to explore in the park: 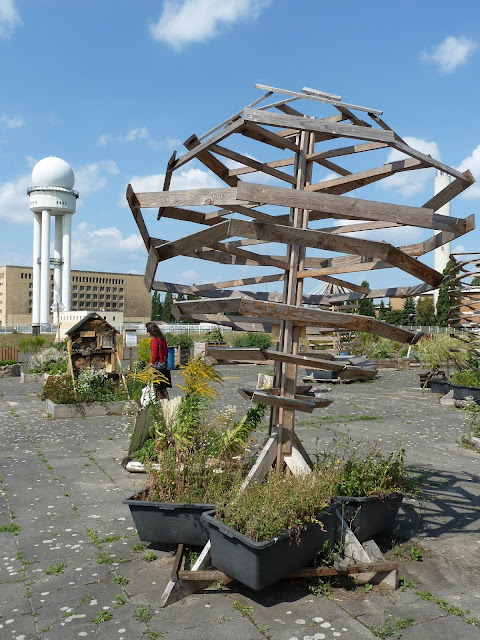 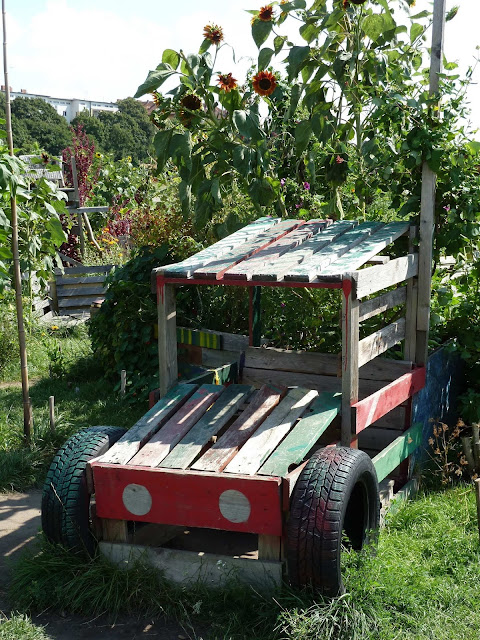 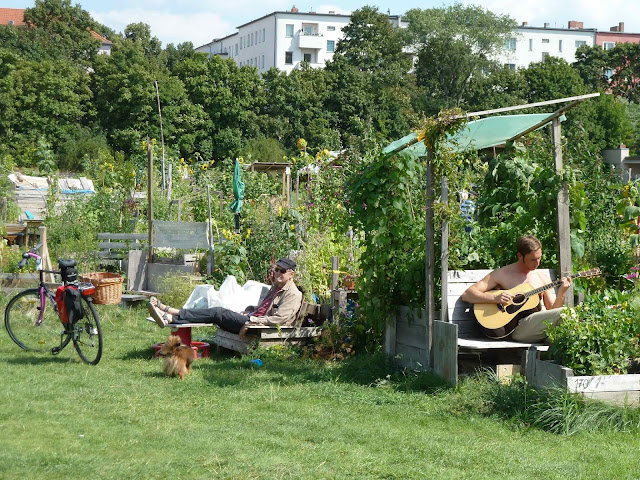 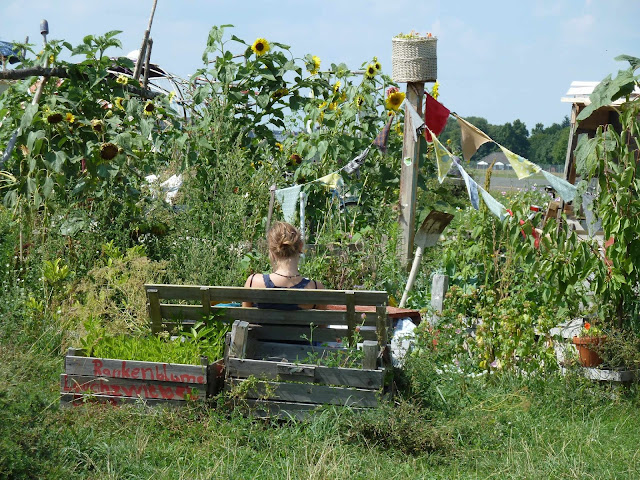 It was rather a lovely, relaxing and fascinating place to visit and I'm glad we took the time to stop off and explore it, during our packed-full, busy few days in Berlin. You can read more about the site's history and future plans for the park and see more historic pictures here, if this post has piqued your interest. 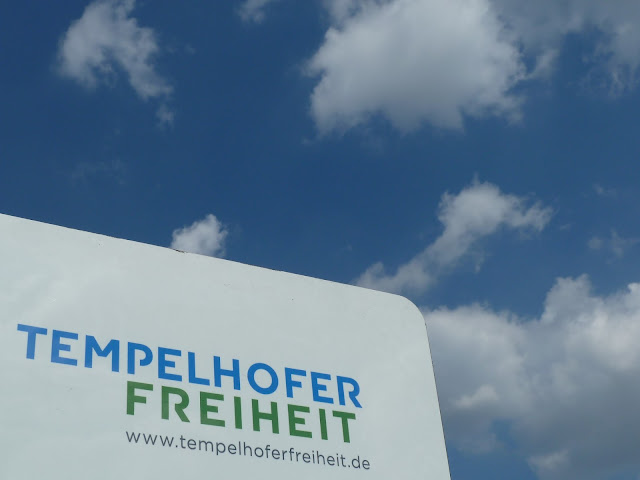 Where dips the rocky highland
Of Sleuth Wood in the lake,
There lies a leafy island
Where flapping herons wake
The drowsy water rats;
There we've hid our faery vats,
Full of berrys
And of the reddest stolen cherries.
Come away, O human child!
To the waters and the wild
With a faery, hand in hand,
For the world's more full of weeping than you can understand.


Where the wave of moonlight glosses

The dim gray sands with light,
Far off by furthest Rosses
We foot it all the night,
Weaving olden dances
Mingling hands and mingling glances
Till the moon has taken flight.
To and fro we leap
And chase the frothy bubbles,
While the world is full of troubles
And anxious in its sleep.
Come away, O human child!
To the waters and the wild
With a faery, hand in hand,
For the world's more full of weeping than you can understand.

Where the wandering water gushes
From the hills above Glen-Car,
In pools among the rushes
That scarce could bathe a star,
We seek for slumbering trout
And whispering in their ears
Give them unquiet dreams;
Leaning softly out
From ferns that drop their tears
Over the young streams.
Come away, O human child!
To the waters and the wild
With a faery, hand in hand,
For the world's more full of weeping than you can understand.


Away with us he's going,

The solemn-eyed:
He'll hear no more the lowing
Of the calves on the warm hillside
Or the kettle on the hob
Sing peace into his breast,
Or see the brown mice bob
Round and round the oatmeal chest.
For he comes, the human child,
To the waters and the wild
With a faery, hand in hand,
For the world's more full of weeping than he can understand.


A love letter from Ireland! I spent a few days there with my parents, discovering and falling in love with that wonderful wee island, from whence my father's family harks a few generations back. We stayed in my ancestors' wee town in County Donegal, but also explored parts of Mayo, Derry and Sligo, including a stop at the waterfalls mentioned in the Yeats poem above. It was all rather magical...

I'm on holidays! I can't begin to tell you how excited I am to have started my first proper, week-(plus-)long break from work in 10 whole months! And it's jam-packed full of fun and variety too.

I'm off to west-coast Ireland tomorrow for three nights...

Then to London overnight before heading on to Berlin for three nights...

Then back home in time for the weekend and a friend's birthday. Phew! Should be good! See you on the other side...

Long-time readers will recall that, many moons ago, I wrote a post lamenting the demise of cute and stylish rain bonnets. And it occurs to me now that I never followed up on that post, despite the fact that I did follow through on the rain bonnet hunt. I ended up buying a bonnet online, through Ebay I think, and I'm really quite pleased with the one I scored, for tuppence really.


Here I am sporting it as the rain came down at a Diamond Jubilee garden party last year. Yes, it's taken me that long to write this post... But this was the perfect occasion for it, as an umbrella really wouldn't have been convenient or wanted when there was croquet and dancing to be had. (As you are admiring the bonnet, do also take a moment to appreciate my fabulous, patriotic badge with a dashing young Betty bordered by the Union Flag.)

The rain bonnet seemed to be largely accepted within the confines of an event such as this. However, as a general rule and as with any of these slightly more quirky things, you have to keep your chin up and ignore some funny looks if you're going to wear a rain bonnet. But I happen to think it looks rather smashing, and thinking that in turn helps me to keep my chin up as I embrace the bonnet.

.... Although, to be honest, it doesn't get the full workout it deserves, as I'm prone to switch bags and find I've left it in the wrong one when I'm caught off guard by the rain... And the downside of the bonnet is the rustling plastic noise so close to your ears. Nevertheless, I do recommend investing a few pennies in one, or maybe more than one, so you can leave a bonnet in each of your favourite bags.

For the moment though, I'm hoping the need for a rain bonnet holds off for at least a month more and that the English summer lingers on a tad longer.
Posted by Miss Marie at 21:41 34 comments:

UPDATE: Walthamstow Town Hall is now no longer participating in the Open House Weekend due to major electrical works taking place... So disappointing! But maybe next year...

I've just booked my volunteering slot for the London Open House Weekend, which is set to take place on 21-22 September this year. I will be offering my guiding services at...

Isn't she a beauty??

If you fancy dropping by to say hello and to have a nosey around this awesome 1930s edifice, come down between 10am and noon on Saturday, 21 September.

And keep an eye out on the Open House website for the full programme, to be released in mid August.