Last weekend, I was feeling a bit run down so decided to spend a gentle afternoon in the Tate Britain. As I wandered through the permanent collection, I stopped to look at the above Whistler painting, which they have on display. A woman who also stopped to examine it asked me if I knew if we were allowed to take photographs. I said that I thought so, if you didn't use a flash (apologies to the Tate is this was misinformation!).

We carried on our conversation and she told me that she was very excited to see the painting in person as she was president of Whistler House - the birthplace of James McNeill Whistler - in Masschusetts. We then went on to talking about the various artists' residences around Chelsea, here in London, and her plans to go on a walk and see some of them. She was quite impressed by my knowledge of the topic - which has come from a combination of volunteering at the wonderful Carlyle's House for some time a few years ago and recent work advising on listed artists' studio flats in the area... and supplemented by general interest in the period and its people as well.

Perhaps I ought to do a post on the topic one day. (Did you know, for example, that Dante Gabriel Rossetti had a whole collection of exotic animals at his house on Cheyne Walk, including a wombat?)  But, whether that eventuates or not, it made an enjoyable and stimulating interlude to my afternoon, speaking with this interesting and interested lady at the Tate. Art galleries really are a great place for good conversation with random strangers. 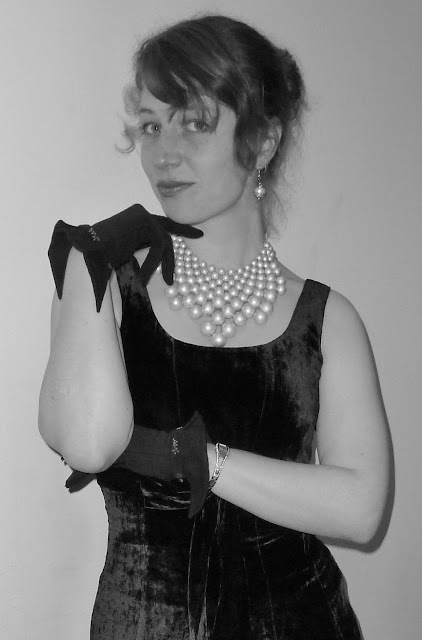 A few weeks ago, my dear Mama and I went on shopping together on Portobello Road for my birthday. We started out at What Katie Did, getting me kitted out with a full vintage underwear ensemble, which was great fun. We then carried on to browse various shops and stalls at the north end of the market. The day ended up turning into quite the shopping spree as the right things kept cropping up and I let my mother indulge me. (I did also buy her a friendship bracelet as a memento of our fun day, so it wasn't all about me...)

By coincidence, the shopping trip ended up taking on quite an Audrey Hepburn theme. Firstly, my fancy was captured by a print of Audrey by an illustrator called Stanley Chow at one stall. I pondered it for a while, before opting to have a wander and return if I decided I wanted it. 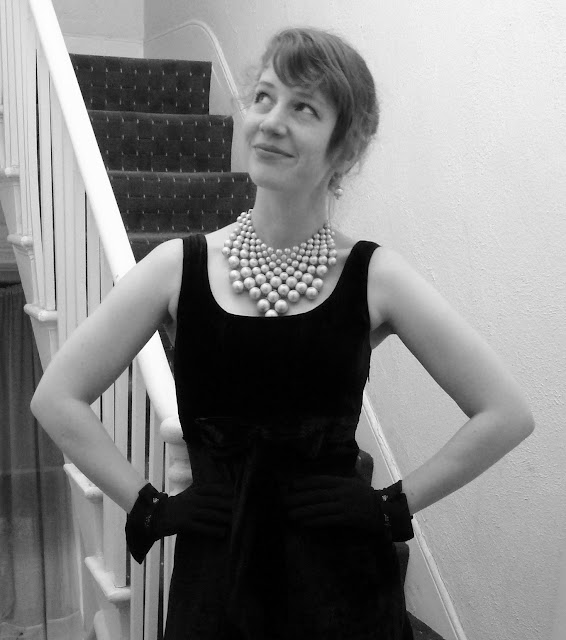 In the meantime, we tried on some clothes here and there, and stumbled across a lovely little black dress  with a rather '60s evening/cocktail feel, at a great price and with a great fit. After buying that, I remembered a fun necklace I'd seen on the way into the market, and wondered if it might go nicely with the dress. People were starting to pack up this point, and I thought we may have missed out, but happily the stall was still there. And the necklace fit perfectly with the dress! I was pleased, as I felt the two together made a sort of nod - without being a patent copy of - Audrey Hepburn in Breakfast at Tiffany's. The dress was a classic look, while the necklace brought a slightly unusual, modern element to things.

This weekend, I had the opportunity to bring them together for the first time when I went out to Piano, a piano bar in Kensington, with The Cat as part of my birthday celebrations. I teamed the dress and necklace with the amazing vintage Dior gloves my mother got me as another birthday present (ain't she wonderful?), my What Katie Did suspender belt and seamed stockings, kitten heels from Jones Bootmaker and 'pearl' earrings (a Christmas present from my mother years ago).

We had a great night out too, enjoying the jazz and the atmosphere. It was a lovely, chilled Sunday night vibe but we're now planning to go back one night in the week, when there's apparently a pianist who takes requests and a sort of open mic set up. Sounds fabulous! 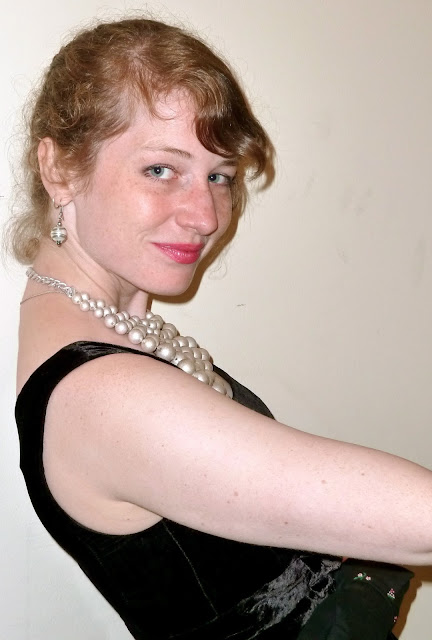 Oh, and back to the shopping spree... My mother talked me into letting her get me the Audrey print in the end as well. 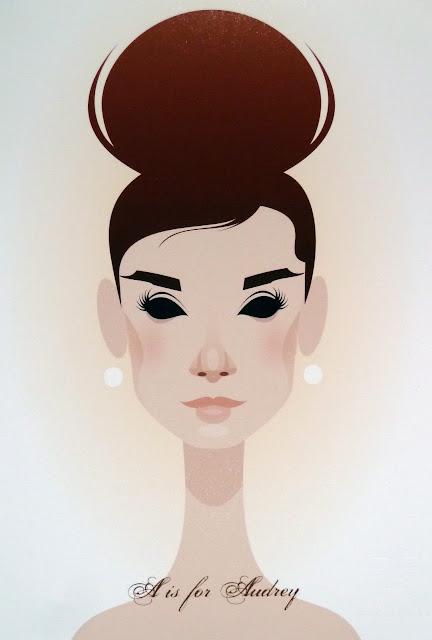 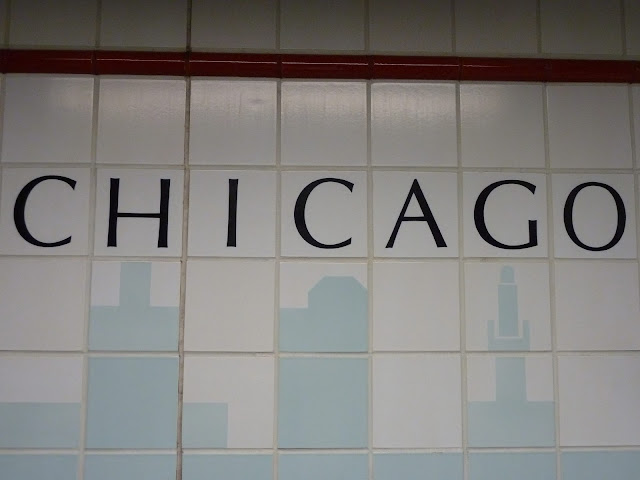 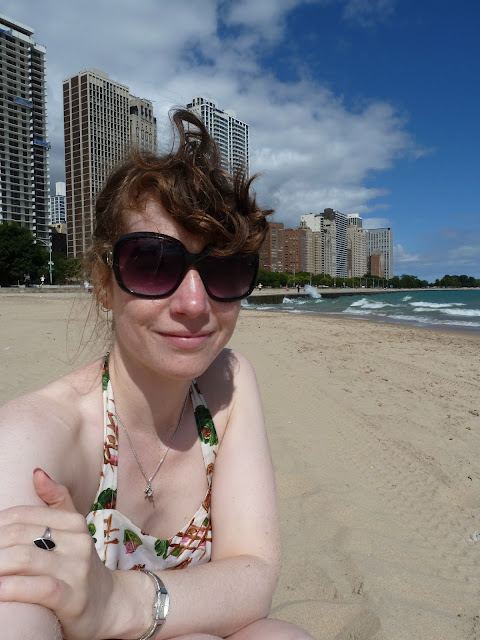 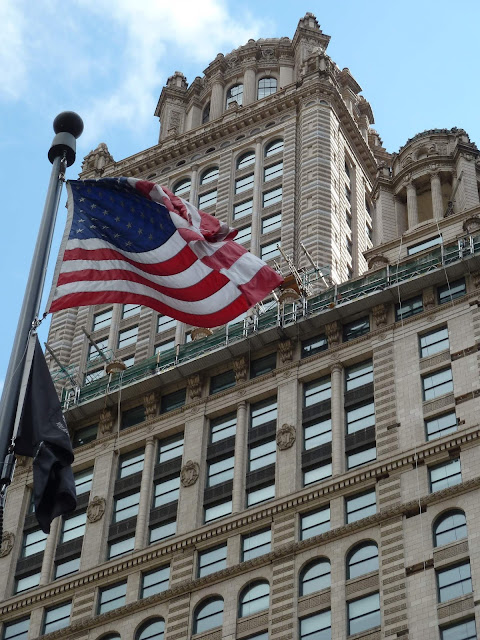 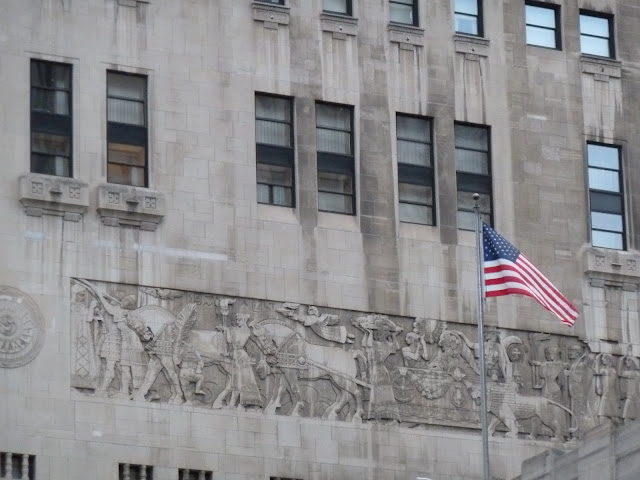 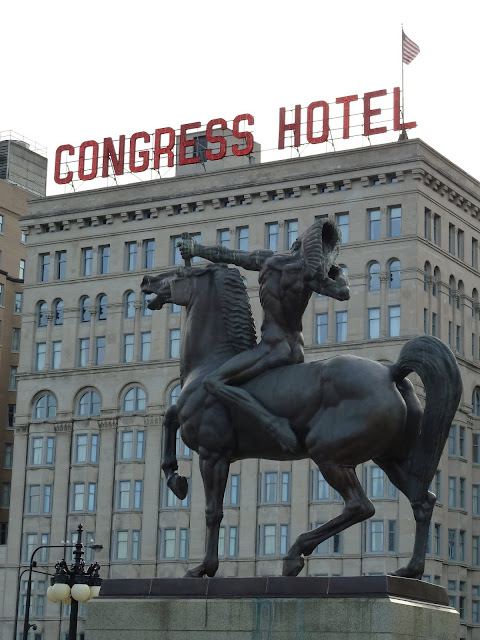 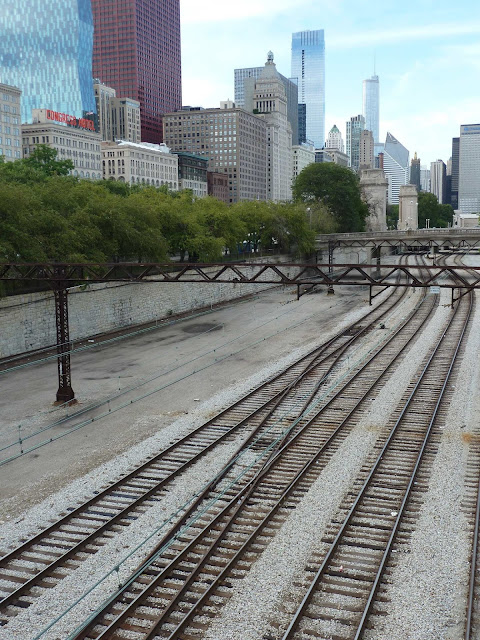 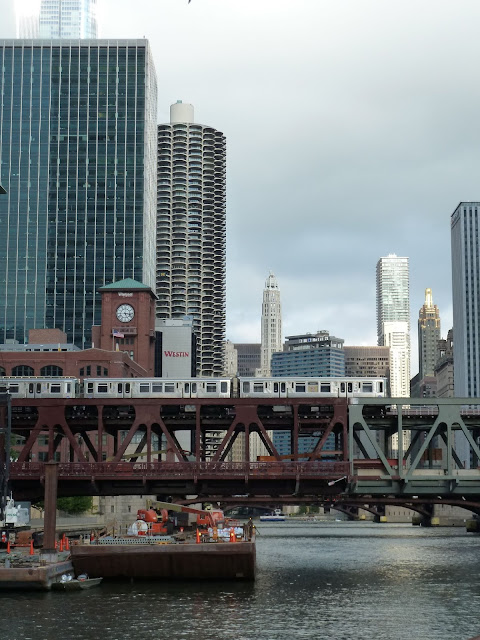 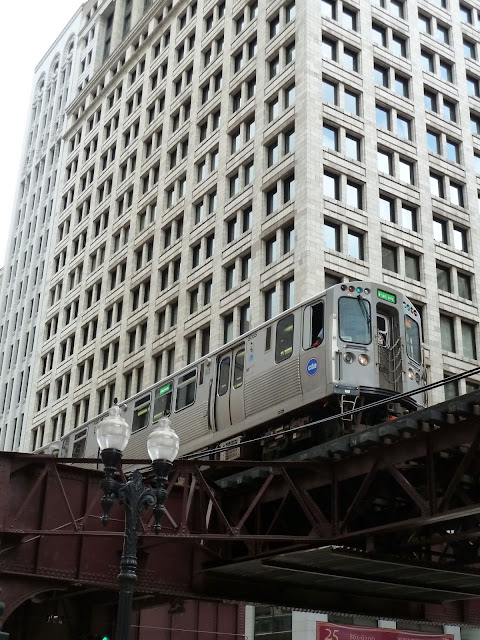 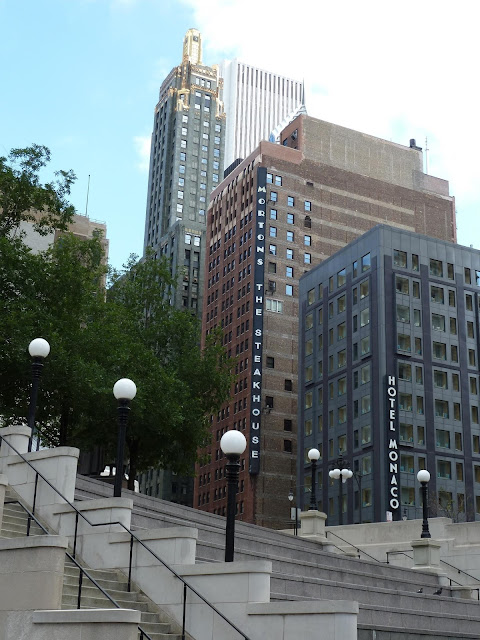 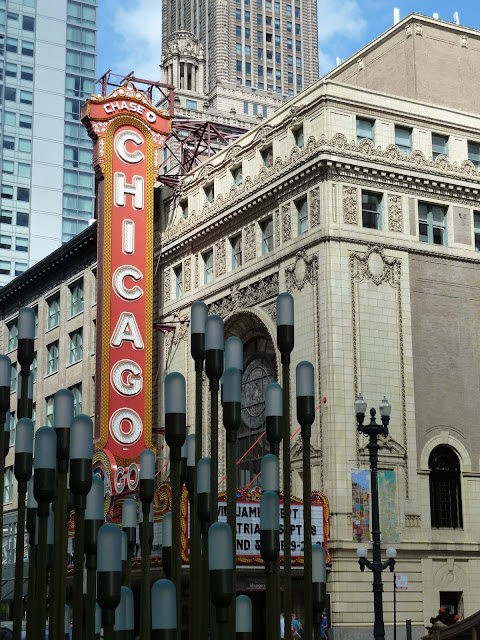 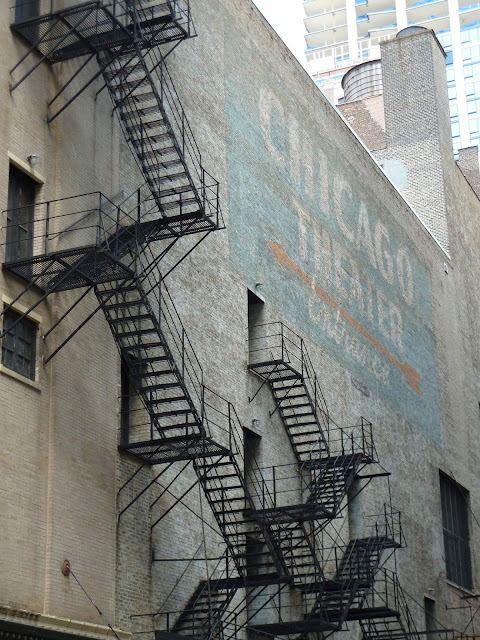 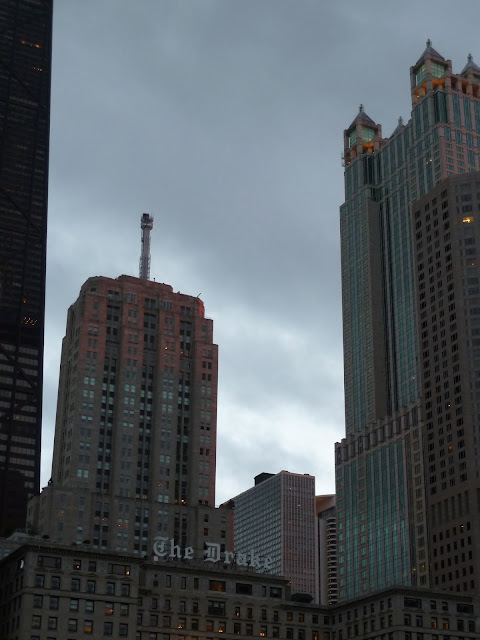 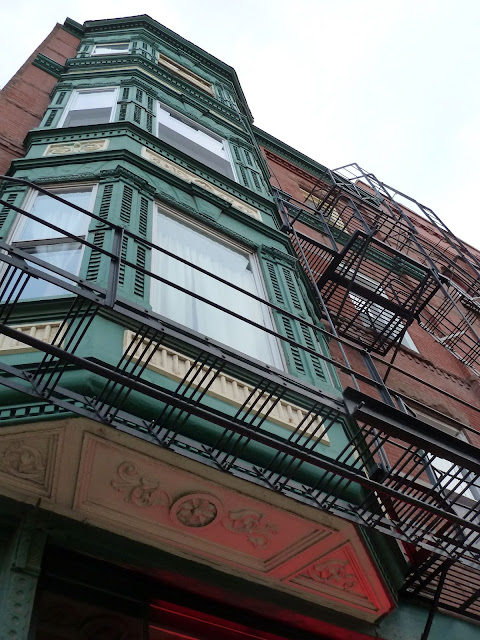 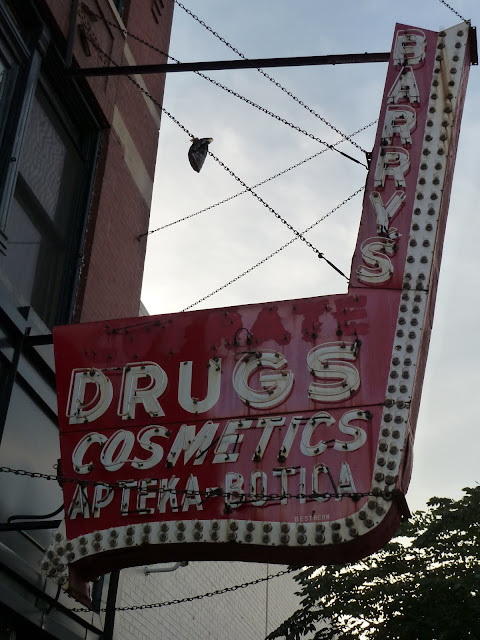 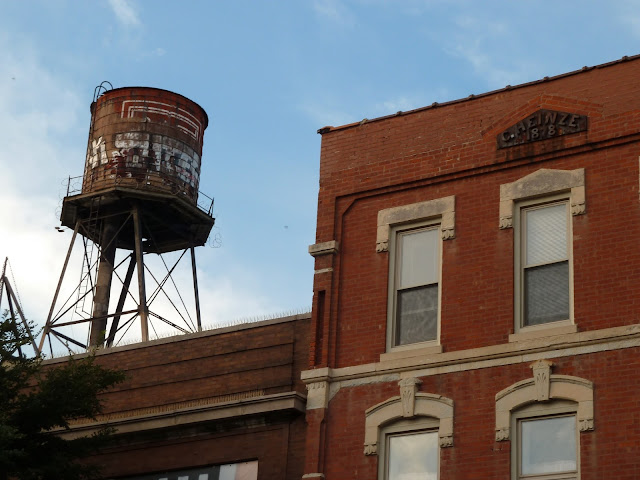 God bless you, Chicago, you beautiful city!
Posted by Miss Marie at 21:03 10 comments:

Yes, I can legitimately wish you all a happy Labor Day (with no 'u' and all) because I am actually in Chicago right now! Yes, Chicago, Illinois, United States of America!


I'm sure you're dying to hear more but this will be my last post until I get back to London in a week's time. Until then, I'll just say that it's my kind of town, Chicago is!

Email ThisBlogThis!Share to TwitterShare to FacebookShare to Pinterest
Labels: adventures, holidays, love letter from elsewhere
Newer Posts Older Posts Home
Subscribe to: Posts (Atom)
Love Letter from London is the personal blog of Lisa Marie, an architectural historian who sometimes wonders if she should have been a fashion historian. It recounts various architectural, sartorial and miscellaneous historical adventures and observations...
Read more about Love Letter from London