Love Letter Redirected (and a Trip to Sussex)

As everyone surely knows by now, Google Reader is closing down. If you want to keep receiving love letters, you can follow me through Bloglovin. Just click this link or the badge down in the right-hand side bar.

And I'm sorry there haven't been so many love letters of late. I have tonnes to post about but haven't had the time to do it lately. But I am hoping to get back into more regular posting as I'm missing it awfully.

In the meantime, I will share just a few pictures from beautiful Sussex with you, where I was but a few days ago for a perfect, but too short, country break...


This Friday just past (14 June) marked the hundredth anniversary of the memorial service for Emily Wilding Davison, the Suffragette who died from injuries sustained when she was run down by the king's horse at the Epsom Derby in 1913. She is also known for having hidden out in the Houses of Parliament on census night in 1911, so that she could be recorded as the sole occupant.


In commemoration of the anniversary of her death, there has been a festival of arts and music running over the past few days at St George, Bloomsbury, which is where her funeral took place. Sadly, I wasn't able to make it to any of the events - I had been particularly looking forward to the Suffragettes parade on Saturday morning but, alas, I couldn't get there in the end.

However, I at least made it to the church service this morning. And naturally, I took the chance to dress appropriately. The colours adopted by the Women's Social and Political Union were purple, green and white - purple for dignity, green for hope, and white for purity. (What purity has to do with why women should have suffrage is beyond me, and slightly riles me, I must confess. It suggests that women should be allowed to vote because they are 'good', which just perpetuates sexist ideas, if you ask me. But that's an aside and I'm just going to view it as an indicator of a different time and let it lie...)

So, for church today I adopted purple, green, and a touch of white, in recognition of our predecessors who secured women's right to vote in this country. I personally look more like a sweet little angel in this photo than a soldier in a petticoat but there you go... 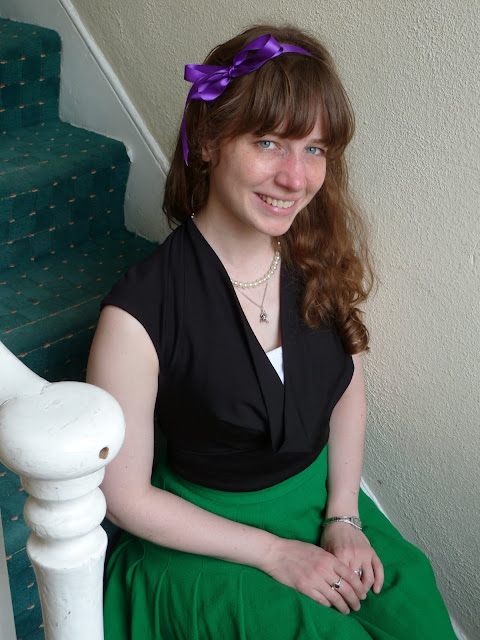 And I will leave you with Mary Poppins and the first I ever heard of the Suffragettes.


Our daughters' daughters will adore us,
and they'll sing in grateful chorus,
'Well done, sister Suffragette!'

Busy, busy, bzzz, bzzz! Things are rather quite hectic and full at present but I'm looking forward to a wee break soon. I'm having a few days of country/coast (not decided which yet!) and before that, in a week from today, I'll be at a building conservation summer school up north.

But I have a slight dilemma regarding the summer school because, as part of it, I will be attending a dinner at which I will be accepting an award for the thesis I submitted last year. And I'm really wondering... what does one wear to such a thing?? Do you think it would be a bit much to take my inspiration from the Hollywood stars...? Perhaps, just a little...

Email ThisBlogThis!Share to TwitterShare to FacebookShare to Pinterest
Labels: 20th century fashion, evening style, style icons
Newer Posts Older Posts Home
Subscribe to: Posts (Atom)
Love Letter from London is the personal blog of Lisa Marie, an architectural historian who sometimes wonders if she should have been a fashion historian. It recounts various architectural, sartorial and miscellaneous historical adventures and observations...
Read more about Love Letter from London