Fans of Pushing Daisies will of course know that a cup pie is a single-serve pie with honey baked into the crust.

I've not baked in I can't remember how long... But this occasion all started with my plan to make pumpkin pie to take in as a Halloween treat for my workmates. I love pumpkin, seriously, love pumpkin. I think that it is intentionally designed to be hard to cut up because otherwise humans would simply overdose on it because it is so good. It's the only vegetable for which I am willing to make all that effort.

However, I've only had pumpkin pie once or twice in my life, when I have been fed it by an American friend. I decided that it had been too long since I'd indulged in this wonderful treat and that I would break my baking drought with pumpkin pie. As I was going to take it into work, I thought it would make more sense to make small ones that I could distribute easily.

But it was when I found myself short of sugar for the pastry and The Cat suggested I make up the difference with honey that I realised I was actually making cup pies, with honey as the vital ingredient!


I used a recipe for sweet shortcrust pastry I got off the BBC website, using about 50g of sugar and a few healthy scoops of honey. You can definitely taste the hint of honey. Unfortunately the pastry stayed quite soft even after a proper, long baking, which isn't so good for individual pies that you want to be able to pick up in your hand. I'm not sure if the result was due to the honey or it's just the usual result of the runny pumpkin filling - perhaps pumpkin pie crusts are always a bit soggy and that doesn't matter when you have a slice on a plate? In any case, I'd experiment with different quantities of honey in the pastry if I tried it again, and I'm not sure if it would be worth trying a slightly different approach such as blind baking first...


For the filling, I just pressed on as instructed in the BBC's pumpkin pie recipe, without messing about.


The next adjustment came with the baking time. As I was doing lots of small pies, they required less baking time than one big one, but it was still a good 25 minutes.


I found the result really very sweet - maybe I got my measurements slightly wrong, used the wrong kind of pumpkin, or should have made adjustments to the sweet ingredients due to the honey in the crust... Or maybe I'm just not used to treats this sugary. But adding a dollop of cream took the edge off the sweetness, making it almost perfect.

Email ThisBlogThis!Share to TwitterShare to FacebookShare to Pinterest
Labels: classic television, Halloween, made by me

The Mysterious Tale of an Apple in N1

Halloween 2012 officially started last night for me, when I headed out on the town with my fancy-dressing partner in crime. But before I share my costume with you, I must tell you the mysterious tale of an apple in N1...


Yesterday evening, I was on my way to my friend's flat in Canonbury, to get ready for our night out. It was my first visit to her new flat so, having found the right street, I was walking down it, looking for the right building. It was dark, the sky had opened up, and I had pulled my scarf up over my head in a vague attempt to keep dry. As I stood, waiting for some cars to pass so I could cross a street, I felt a tap tap at my right foot.

'Someone is knocking at my foot', I thought for a second, before realising the oddness of that idea.

I then looked down to see a small, red apple resting next to my foot.


'How odd!' I thought to myself. I looked around to see where it might have come from. I had walked over this section of footpath moments before (in hunting for my friend's flat, I had accidentally gone to the wrong house first, so had to retrace my steps backwards). There was no-one about who might have dropped it. There were no apple trees about from which it might have fallen... and in any case, by the looks of it, it seemed too polished to have come from a tree.

Completely bemused, and feeling something like Snow White, I reached down and picked up the apple.


I then carried it with me to my friend's place. When she opened the door, I recounted to her the mysterious tale.

'What's even weirder', she replied, 'is that you picked up the apple.'

I just couldn't resist though. It felt like something from a fairy tale. I couldn't have walked away from the apple after it knocked at my foot in that fashion. I carried it with me in my handbag all night and have brought it home. What happens now, I don't know...


Am I completely mad for being so transfixed by this mysterious apple? Perhaps... Probably...

But as for my outfit, I'm afraid it wasn't nearly so extravagant and impressive as last year's effort because we weren't quite so organised, what with my friend moving flat and me being abroad and then overwhelmed with returning to full-time work. However, we kind of managed to pull it together at last minute, with some B-grade '50s horror style in the form of victims of the blob or some other such other-worldly monster...


And I will be making pumpkin pie and hopefully doing something else fun and appropriate on Halloween night itself to add some excitement to the mid-week. Hope you all had a fun weekend and have a happy Halloween!


Jillaroo (noun): a young woman working on a sheep or cattle station to gain experience.
Origin 1940s: from the given name, Jill, on the pattern of 'jackroo'.

Where do you begin with catching up, when you've been away from blogging for two months, having holidays in Australia, building up an arsenal of literally hundreds of photographs?

The background story: When I was spending a few weeks in Gippsland, in the south-eastern corner of Australia, I went up into what is known as the high country, the mountainous area towards the the top of the state of Victoria.


In this beautiful part of the world, the 1980s film, The Man from Snowy River, was filmed. Based on a poem by the beloved Australian poet, 'Banjo' Patterson, it's a wonderfully dramatic love story in which a young man proves himself to the local landowner through his ability to capture and tame the infamous wild horses of the area, and in the process wins the heart and hand of the landowner's daughter.


Watching the film after my visit to the High Country, I decided I had to go horse riding. I wanted to be able to ride down the side of a rugged mountain in the fashion of the film's hero in the climactic scene...


And so, horse riding I went! It wasn't quite like the above picture but it was pretty amazing! We went on an hour-and-a-half trail, up and down the side of mountains, traversing rocky ground, splashing through creeks, avoiding wombat holes and trotting past grazing cattle.

Here's my faithful steed, Caddie. She was a bit shy... 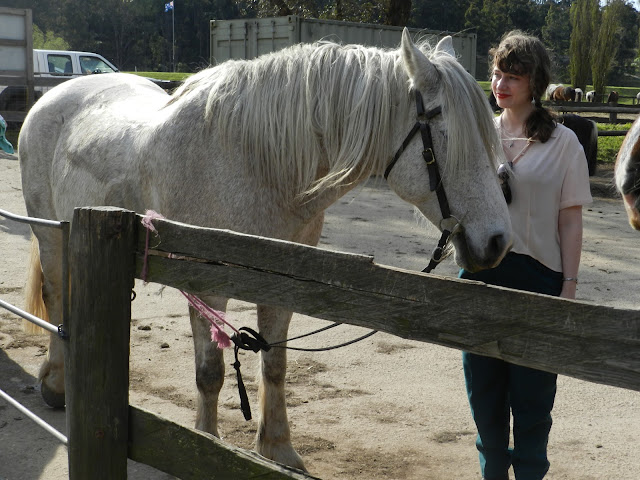 I wasn't able to take pictures on the ride, obviously, particularly as I was very busy concentrating on not falling off and adopting the right bouncing pattern when Caddie trotted and egging her on (I was given one of the more docile horses due to my complete lack of experience, but that meant she had the tendency to slow right down when I had to get her to keep up). But here's a view back down over the place where all the horses lived, Coonawarra Farm Resort, taken after our ride.


Back on solid ground, I could focus on striking a few poses... Here I am, doing my best farm/bush girl look, with hat and all.

(Pictures of me, and the view of Coonawarra, all taken by my lovely mother, who accompanied me bravely on the ride)
Posted by Miss Marie at 22:54 10 comments:

Hullo again, dear readers, after my long absence! I'm back in an autumnal London now but here are a couple of shots from Australia, taken at Bronte Beach in Sydney. I'm wearing an amazing 1950s bathing suit which a family friend gave me. Isn't it gorgeous? It's part of a collection of clothes she was given by her grandmother. As she doesn't wear it, she thought it better that it be used for the purpose it was intended, rather than sitting in a box... And I was an obvious candidate to be the recipient! 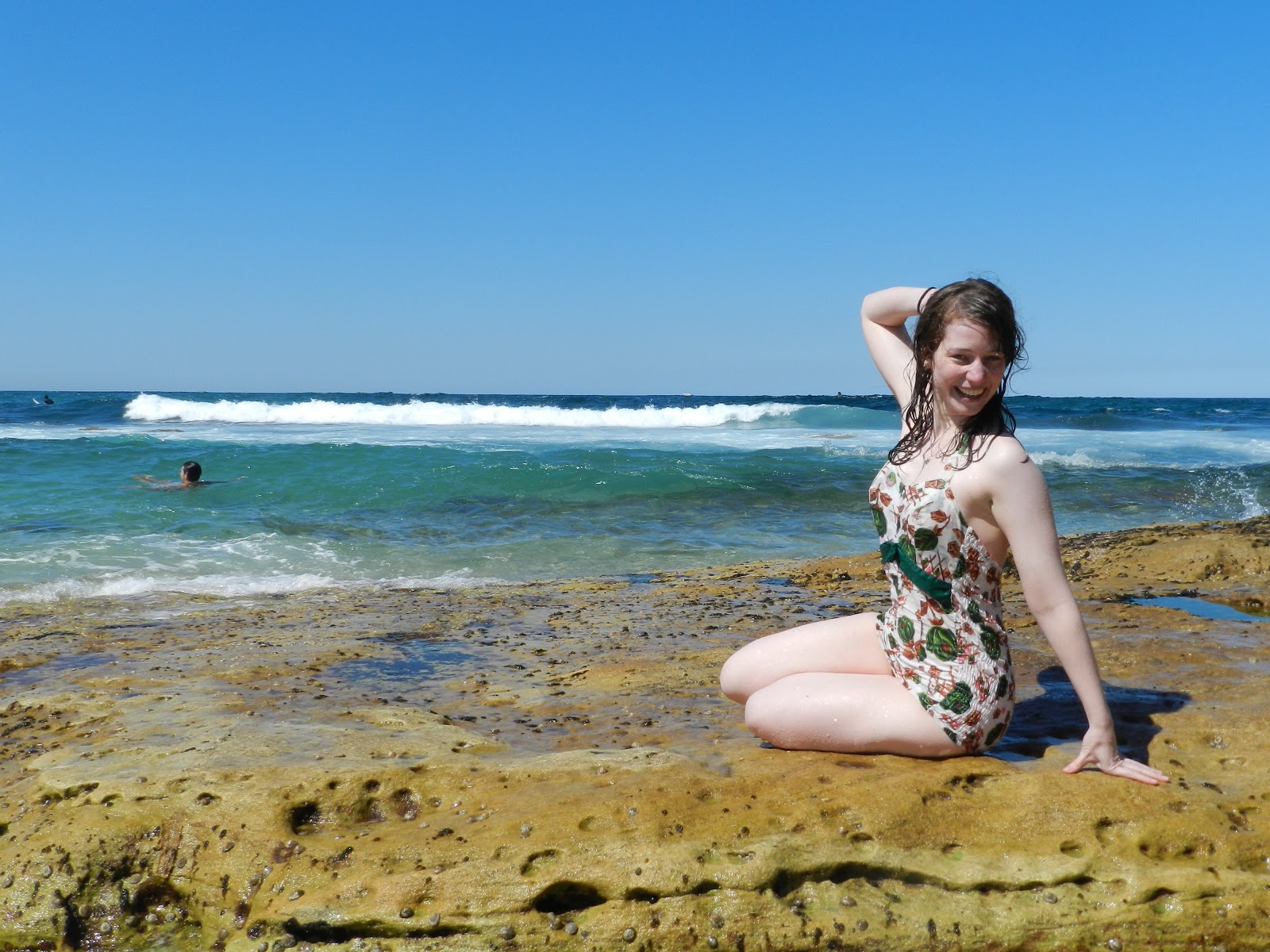 I've been on the lookout for a vintage style bathing suit for a while. There seems to be a fair few being made these days in this kind of style but they are all in modern fabrics and expensive. At the same time, I was apprehensive about buying an actual vintage article as I generally draw the line at pre-loved underwear and swimwear... There's just something that makes me slightly uncertain about it... But, coming from a friend, it felt a bit different and not at all weird. And they are the perfect, genuine, cotton article. The adjustable, buttoned straps initially felt like they were pulling a bit tight over my back, even at the longest length, but I just tied them as a halter neck and voila! 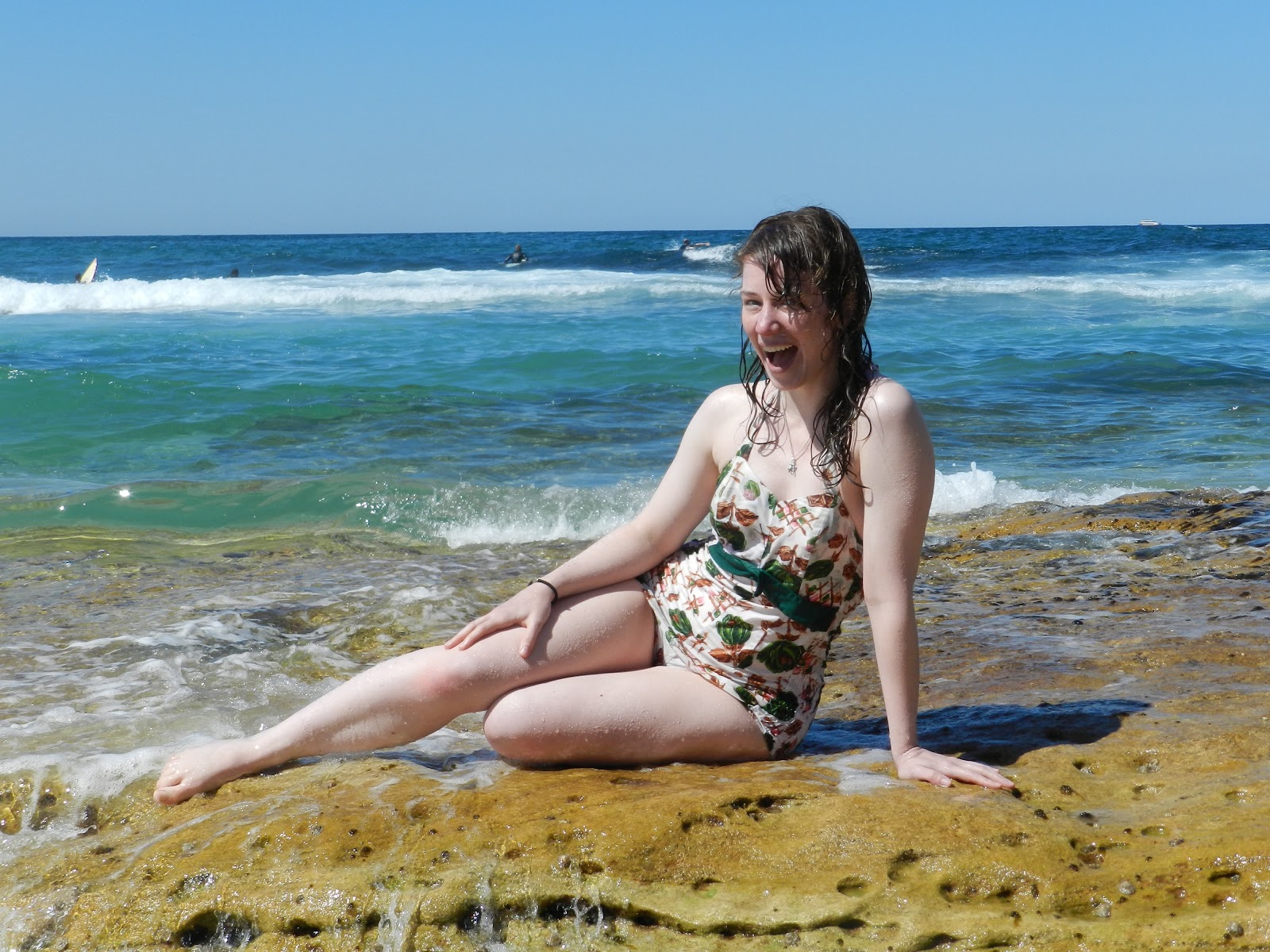 This treasure coming my way after my fruitless search for bathers just goes to show that good things come to those who wait!
Posted by Miss Marie at 20:35 8 comments:

Email ThisBlogThis!Share to TwitterShare to FacebookShare to Pinterest
Labels: 1950s, Australia, holidays, love letter from elsewhere, vintage fashion
Newer Posts Older Posts Home
Subscribe to: Posts (Atom)
Love Letter from London is the personal blog of Lisa Marie, an architectural historian who sometimes wonders if she should have been a fashion historian. It recounts various architectural, sartorial and miscellaneous historical adventures and observations...
Read more about Love Letter from London