Last Sunday evening, I succeeded in hiring my first ever Boris bike. For those unfamiliar with them, Boris bikes are London's bike hire scheme, nicknamed after our buffoon of a mayor. But, it was brilliant fun and now I'm somewhat addicted - I just want to get back on a bicycle and hit London's mean streets again. Preferably, though, I would like to get my own because the Boris bikes do have their shortcomings, particularly the gear system which means you have to cycle especially vigorously for not too much gain...


But it's such wonderful fun, whizzing around London's streets on a bicycle. My first experience, which took place last weekend with The Cat, happened as we were walking home from the Barbican after martinis on a mild Sunday evening. I've tried to hire before but not had my card accepted. This time, however, it worked. I was just going to go for a slightly scenic, meandering ride home but The Cat was so enthused that he suggested we ride down to the river. And so we did. Down winding, cobbled lanes and across Blackfriars bridge, with London buildings sparkling in the evening light and the Thames flowing under us. Perfectly romantic!

Then I had another chance for a ride yesterday evening, when I was heading down to south London to play boules in Cleaver Square and then out to dinner.


One of our party was riding his bike so I opted to join him on a Boris bike, rather than catching the tube or bus. Down over the river again, to Kennington, via the perilous Elephant & Castle roundabout, at which point he leaned over to me as we were stopped at traffic lights and said, 'If your mother could see what you were doing right now, she would kill me' (... and now my mother is going to read this, so I will make sure to keep this friend anonymous, just in case!). But there is something that appeals to me about cycling through busy streets much more than the prospect of, say, cycling along country lanes. Although I'm sure that would be lovely too.

Finally, we cycled home at the end of the evening after dinner, whizzing back east along the Embankment from Vauxhall. A far nicer way to end an evening than getting on the tube, even if I probably got more sweaty... At least it's satisfying sweat mixed with invigoration and satisfaction, rather than the uncomfortable sweat caused by the unnatural atmosphere of the underground.


I'm so sad to think that Sydney doesn't have a bike hire system (as far as I'm aware?) because it would be perfect to be able to carry on with my new found love while I'm on holiday. But when I'm back in London, I will start looking into acquiring my own bike, and will continue to take advantage of the Boris bikes in the interim.

The only problem with cycling around London is the risk of getting distracted by all the beautiful buildings you pass, especially dangerous when you're with a fellow architectural historian, as I was last night! Eyes on the road, people!
Posted by Miss Marie at 14:24 9 comments:

Following up on the travel theme of my last post, and just for a bit of fun...

Air hostesses. What I also want to know is why they don't make them like this as standard anymore? 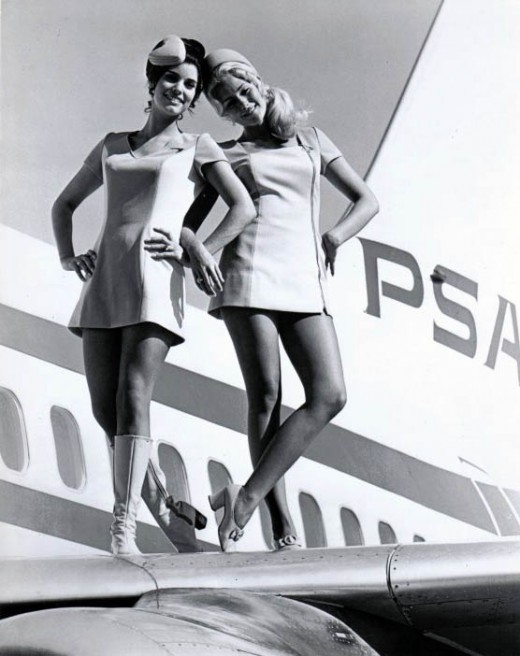 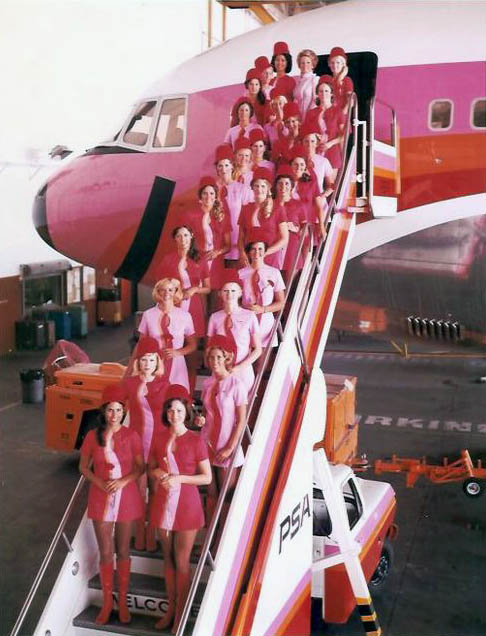 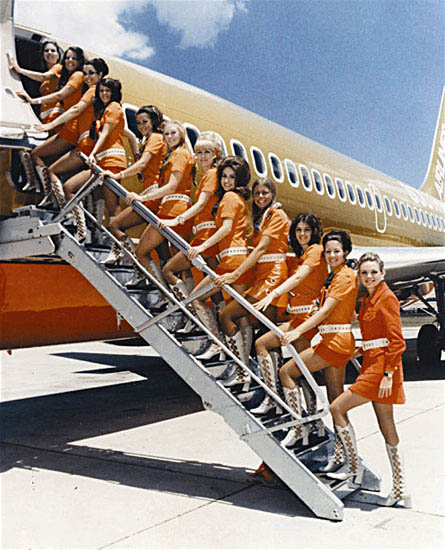 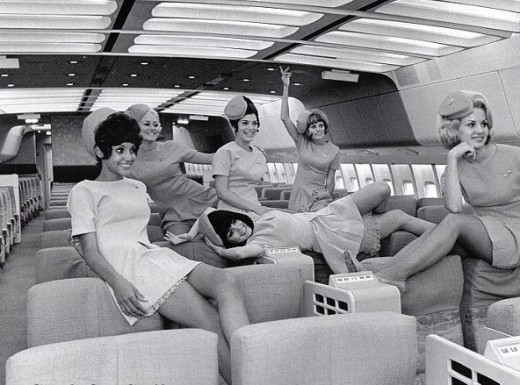 All images are from The Retroscape website. If you don't subscribe to it, you really, really should. It is full of amazing images like this, from all different eras.

And thinking of sassy ladies and planes brought my mind to James Bond and Pussy Galore's Flying Circus girls. Which is also relevant as The Cat and I are finally going off to see the Designing 007 exhibition at the Barbican tomorrow. We have pre-ordered our tickets, and our martinis. Very excited!

The Sad Dearth of Stylish Luggage

I've been trying to find a suitably generously sized but at least somewhat pretty suitcase for my upcoming extended holiday to Australia. What I want to know is why they don't make them like this as standard anymore...


I guess travelling is an entirely different experience these days. Vintage luggage appears to be largely vanity cases and overnight suitcases for short trips, or massive steamer trunks for long voyages aboard ships. Neither of the above is really appropriate or feasible for catching a plane for a two-month holiday. The small suitcases aren't large enough and, as much as I would love to have some men on hand to lug a trunk around for me, sadly, that's not possible.

In reality, I need something modern with wheels. But sadly, all the options are so deeply dull and unstylish... Except this!


Unfortunately, the Steamline luggage above is, ahem, just a tad more expensive than I was hoping to pay... Dammit, don't you just hate having to spend money on functional things when there just isn't the realistic option of choosing something at least a bit personalised or fun and stylish?

I definitely think that someone more entrepreneurial than me should start a more affordable repro vintage luggage line. I really think it would take off... no pun intended.
Posted by Miss Marie at 22:35 14 comments: 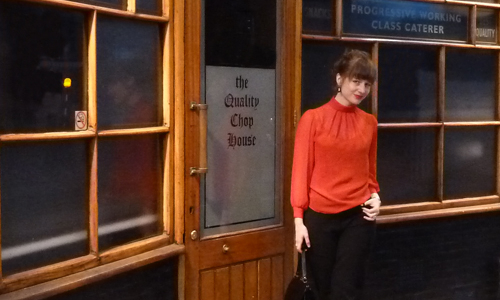 Recently, a lovely lady from a website called Be In Style contacted me to say she wanted to feature Love Letter from London in their weekly series which hand-picks style blogs of interest from around the internet. You can read the feature here, which focuses on vintage and crafty style blogs, and which also happens to include one of my regular reads, Molly-Made.

For the article, I was asked to pick a picture which encapsulated Love Letter from London - which was a lot harder than I anticipated! I wanted to include my two main interests and usual focus of my blog - vintage style and historic architecture... but no one, individual picture captured both those things. After I'd looked through lots of pictures and rejected them all, I ended up popping out to grab some photos of one of my favourite local (and very London) buildings, with myself stood in front, in what I happened to be wearing one Sunday.

After emailing the above photo off to Be In Style for their feature, I thought I may as well turn the pics into a blog post! This was a casual Sunday outfit for a trip to the National Portrait Gallery to see the very satisfying Annual Portrait Award. (Recommended by me! And free!)


The building has been glimpsed in a very early blog post. Located on Farringdon Road, near Rosebery Avenue, it's a late Victorian building, which was converted to a working class restaurant in the very early twentieth century, a place where someone could get a good, hearty meal for a reasonable price. 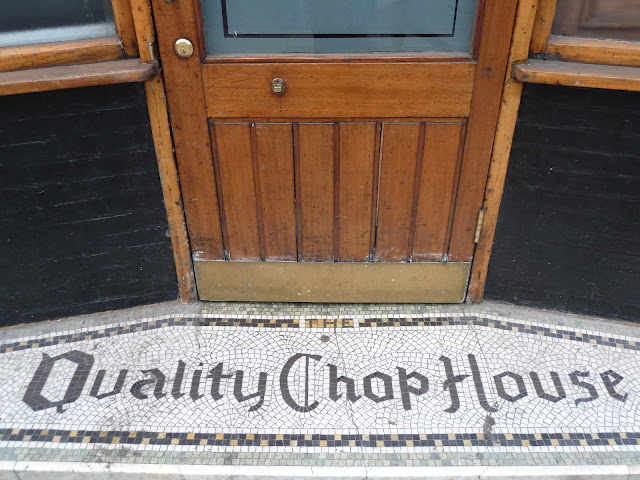 The interiors are amazingly well preserved with fixed benches and tables, timber panelling and decorative pressed tin wall coverings (known as "steleorite"). The wonderful state of preservation of the original fittings and fixtures is one of the reasons this quirky piece of social history has been designated as a Grade II listed building. Sadly, it is presently closed, so this historic picture of the interior is all I can provide at present:


Next time (or at some time in the future): the equally lovely Edwardian fire station opposite the Quality Chop House, as glimpsed in the glass reflections of the above photos. I just have to see if the firemen will agree to posing for some pictures for me...
Posted by Miss Marie at 20:55 9 comments: