After an incredibly mild Christmas and New Year, winter has come to London and snow has been falling these past few days. Aside from causing me to joyfully skip and dance in the snowfall, the sudden need to pull down my winter hats has spurred me on to write this long overdue post about Fabhatrix. 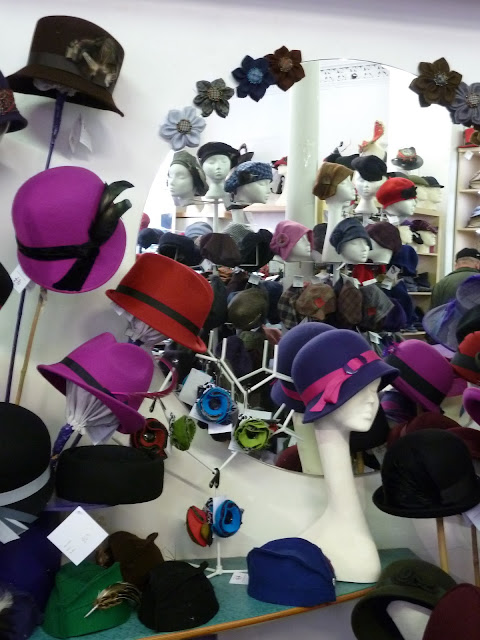 You will have glimpsed Fabhatrix before on this blog. Like a friend of a friend who has caught your attention once or twice at a party and intrigued you, but to whom you have never had the chance to speak. This summer just gone, one of their creations appeared at the Chap Olympiad, a whole long half-year since you first caught wind of them on an autumn visit to Kew Gardens.

And now, the purpose of this post is to formally introduce you.

I first became aware of Fabhatrix when getting to know a workmate who is now one of my best friends here in London. Somehow, on one occasion or another, it came up in conversation that her mother was a milliner, with a hat shop in Edinburgh. I was enchanted by this fact - how wonderfully exotic to have a milliner in the family! I swore to myself, and to my friend, that I would visit the shop when I next had the good fortune to be in Edinburgh.

In September 2011, I found myself in Scotland to meet up with The Cat's parents, who were visiting from abroad. Fabhatrix was firmly on the 'must see' list. As it was around my birthday time, my mum had said I could buy a hat for myself as a birthday present from her. Which was rather a nice thought, my mum buying a hat for me made by my friend's mum.

But there was no fear of that! 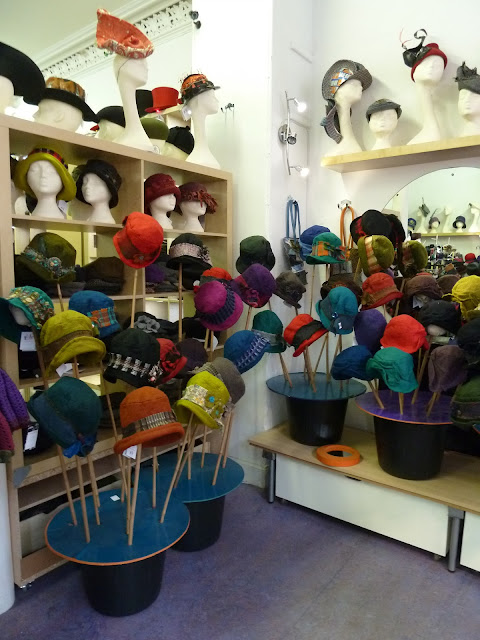 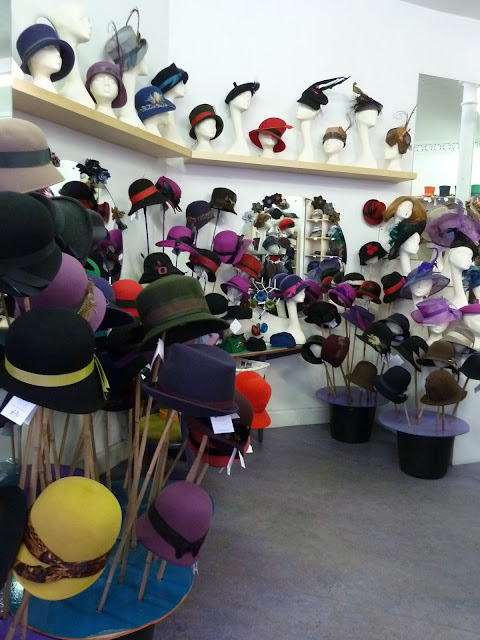 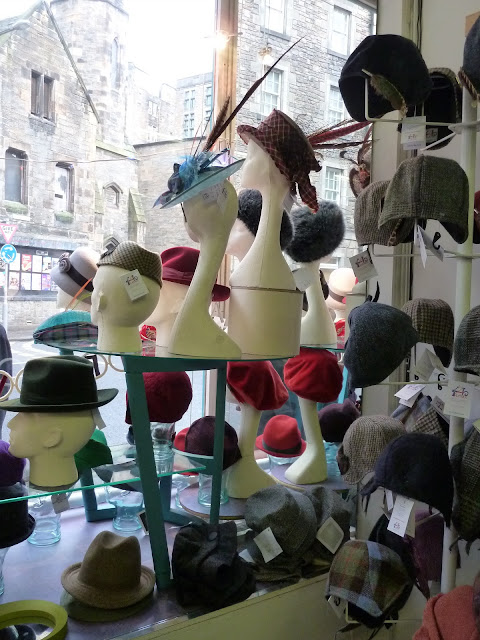 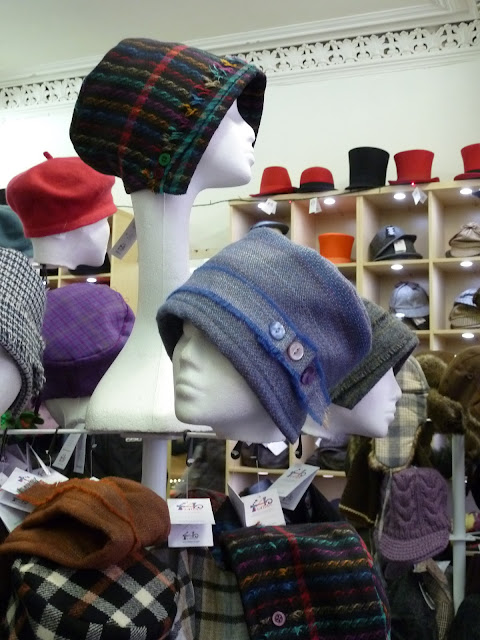 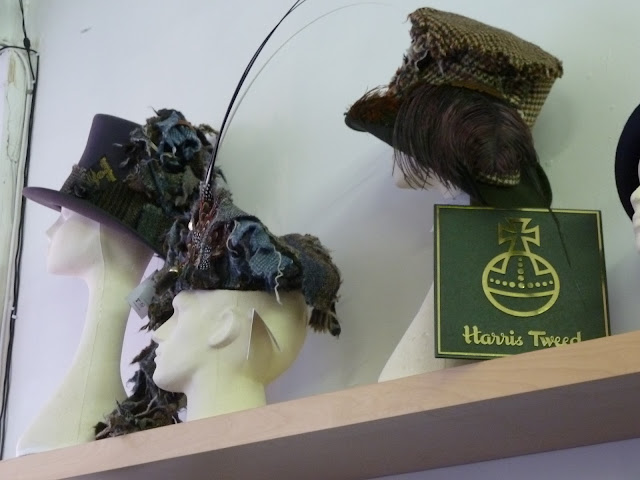 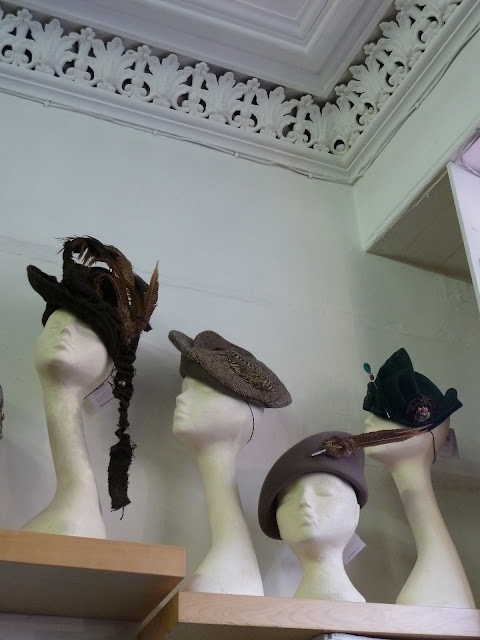 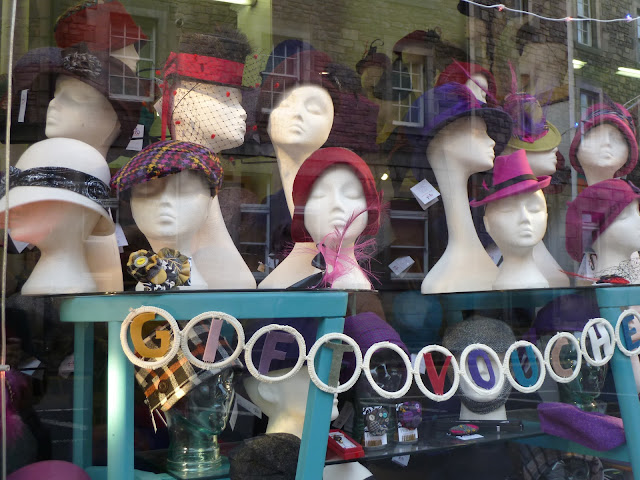 The problem turned out to be having to select just one out of the wonderful selection. Fortunately I had some sense of what I wanted, which was a cloche, so that focused my attention a little and I ended up walking out with this little number:


... Oh, yes, and this little number too. So much for choosing just one:


And that wasn't the last Fabhatrix hat given as a gift within my family. No, with my dad's 60th birthday that year, I wanted to get him something useful and fittingly dignified for a new sextarian. So I offered to replace his beanie with a tweed flatcap. With a family trip up to Edinburgh for Hogmanay 2011, it was the perfect chance to purchase his belated birthday cap. So back to Fabhatrix it was. The focus of their workshop is women's hats but we found something for my dad in the hand-picked selection of men's hats they source and sell.

Somehow, I don't have a close-up photo of his hat but here's a snap of him, behatted, walking down the street in Edinburgh with my mum. Oh yes, and while we were trying on hats for dad, Mum couldn't resist trying on a few herself and ended up walking out with one too!

So, next time you're in Edinburgh, I absolutely urge you to make a visit. Or you can check out their more limited but terribly convenient online store, even if you have no hope of visiting Edinburgh now or anytime soon. Oh, and they do bespoke hats too, if you're feeling like being particularly fancy and commissioning something perfect for a special outfit.

And I just have to end by making absolutely clear that I'm not raving about Fabhatrix just because I'm a friend of the family that own and run it. Though I probably don't really need to clarify that because anyone can see for themselves that I'm just raving about them because they are so unarguably, well, fab!
Posted by Miss Marie at 20:18