The Fairy Tale of Kensington Palace

As mentioned in a post last month, just prior to Christmas I made a visit to Kensington Palace. For the past few years, it has been under partial wraps as an extensive refurbishment was undertaken but it reopened just a few months ago. 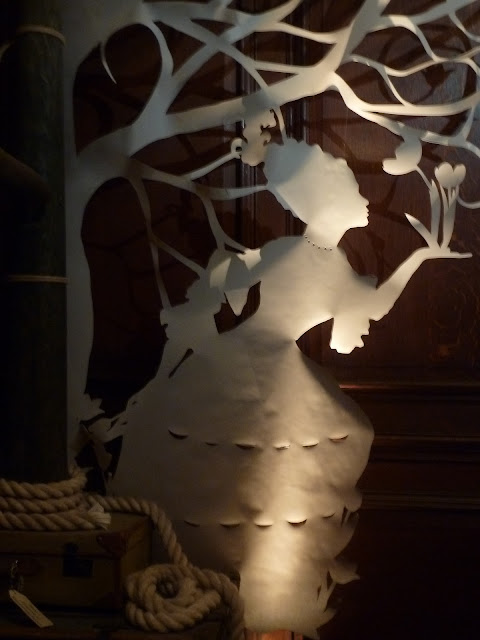 Kensington Palace has been a royal residence since the 17th century, when King William III and Queen Mary II purchased an existing Jacobean mansion for an alternative to the official royal residence. Under their instruction, improvements were undertaken in various phases by Christopher Wren and Nicolas Hawksmoor, two of the period's most renowned architects. Since then, it has played host to various royal episodes and gone through alterations and redecorations both large and small. 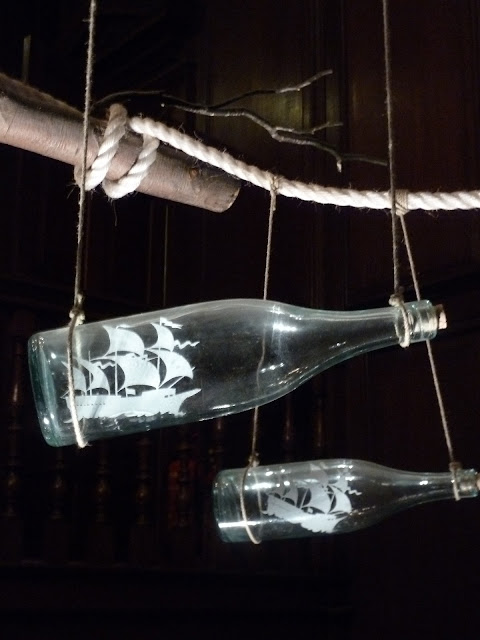 It was only a couple of years ago that I discovered Kensington Palace. Sure, I had heard of it but the thought of visiting didn't particularly appeal to me. I assumed it would be a bit of a stuffy tourist attraction, crowded with people worshipping at the shrine of Princess Diana, who famously lived there.

However, during the refurbishment works, the palace took the marvellous step of transforming those reduced areas of the building that remained open into an "enchanted palace". The posters for this grabbed my attention and I decided to trot along to check it out. My mind was full of wonderful images and, though I rather feared it wouldn't be quite so good as I hoped, I thought it worth a look all the same. 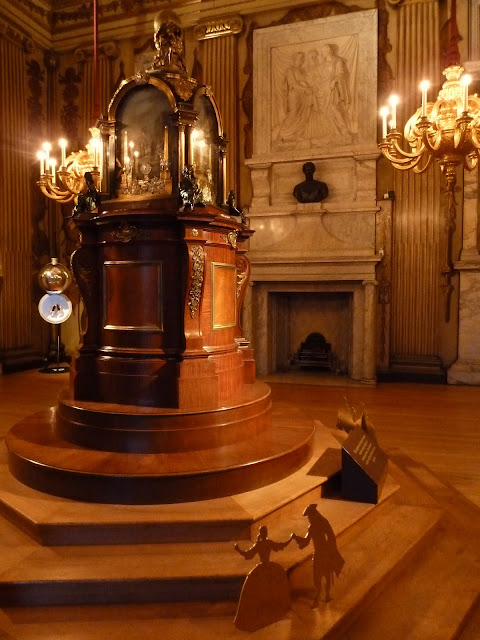 And boy, was it worth a look! The set up was entirely... well... enchanting. It was exquisitely sinister and fairy-talesque. I was somewhat surprised at how dark and haunting they had made it and was pleased that they hadn't been deterred by the possibility that such an approach might traumatise the little kiddy-winks. 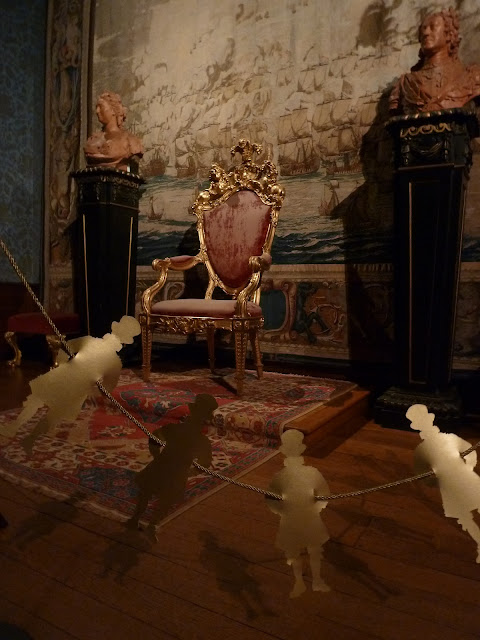 I spent hours in there, immersed in the wonderful atmosphere. At one point, I was asked by a steward if I was okay because I was floating backward and forwards in a delighted daze. I assured him, happily, that I was. His colleague said, "I think she's just enjoying herself, aren't you?". To which I responded, "yes, it's absolutely wonderful!" 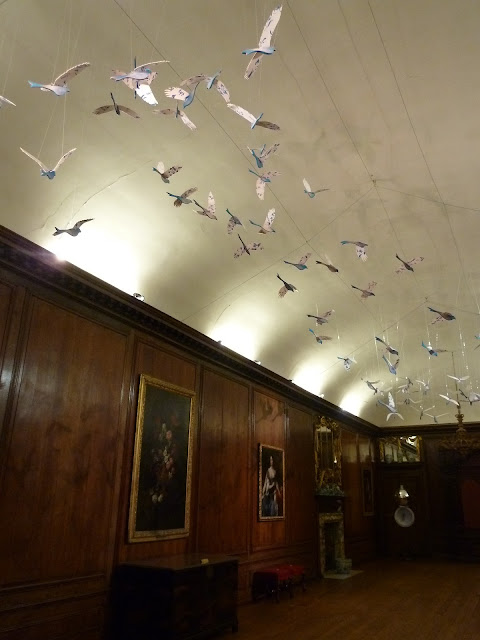 Apart from enjoying the wonderful atmosphere and creative works on display, I also learnt lots about the stories of all the princesses and queens that had inhabited the palace over the years (I took around the children's activity sheet with me...). This was when I learnt about the fabulous, rebellious and chic Princess Margaret. And where I learnt of the tragic tale of Queen Charlotte, who died at 21 shortly after giving birth to a still-born baby boy. She was so beloved by the people of England that the nation came to a halt in mourning her and shops ran out of black cloth due to intense demand. 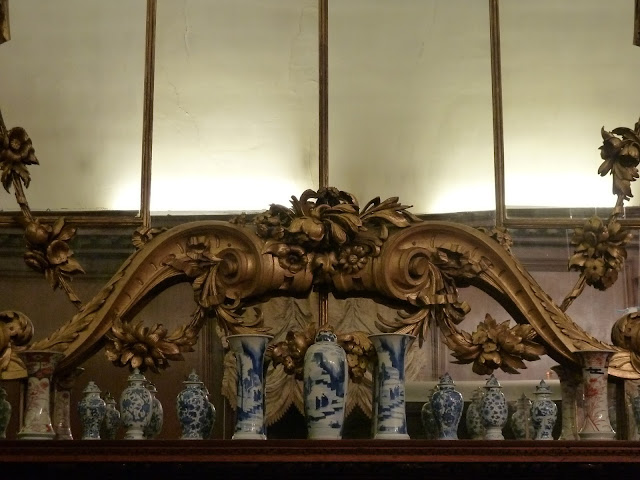 As a result of my visit, I joined up as a member of the Historic Royal Palaces for two years, so I could come back again and again, and go to their other properties at will. I also went on a couple of their adult education days - one at the Tower of London, where I got to climb up on scaffolding and learn about stone repairs, and one at Kensington Palace, where I got to learn about historic wallpaper and then do some screen printing inspired by the designs of papers they had uncovered during the restorations. 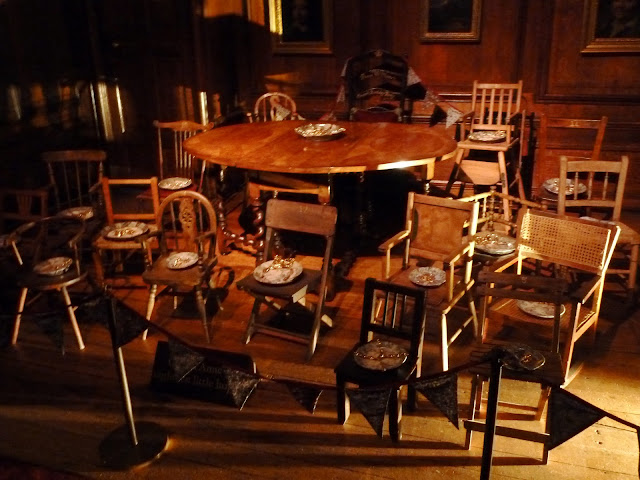 But back to my most recent visit!

I was delighted to discover that they had kept up some of the spirit of the Enchanted Palace. A group called Coney have created installations which tell, in one series of State Apartments, the story of the Stuarts and Prince William, heir to the throne who died after his 11th birthday party and, in another series of State Apartment's, the "game of court" in the Georgian era. They also have some actors and story tellers wandering around - not of the awful tacky sort generally associated with historical re-enactment but, instead, rather wonderfully twisted and strange. 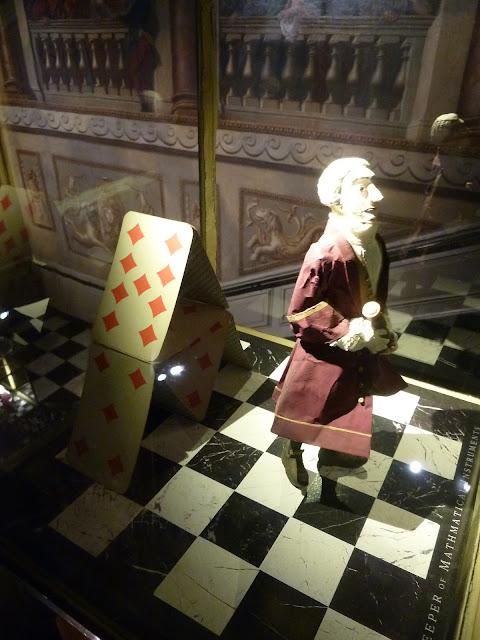 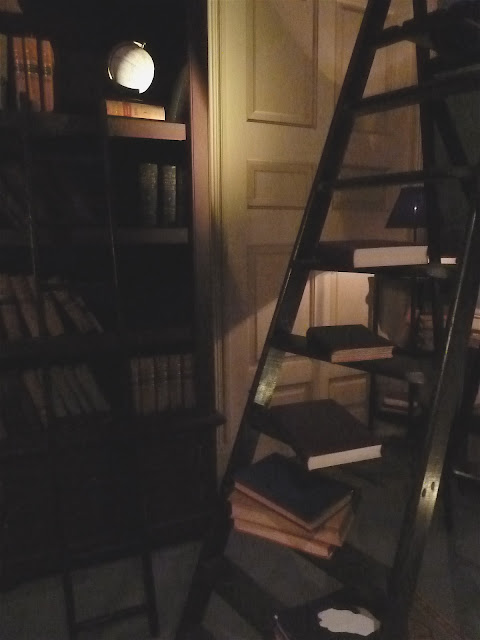 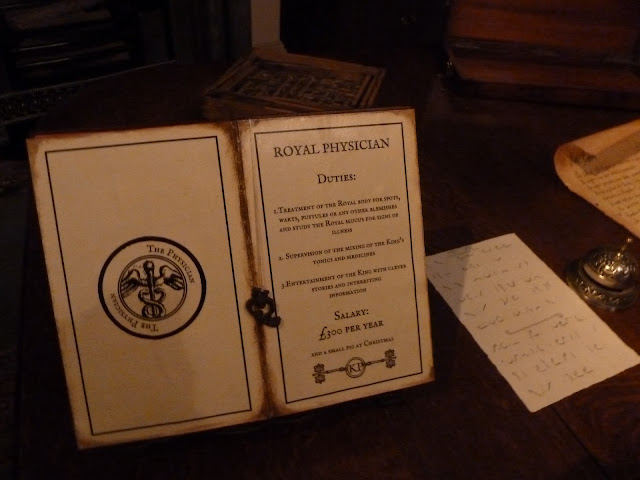 Modern props and artworks are combined with historical artifacts to create this wonderful world. So you can enjoy the quirky and humorous, and then admire museum items such as the clothes of courtiers and royalty from ages past. 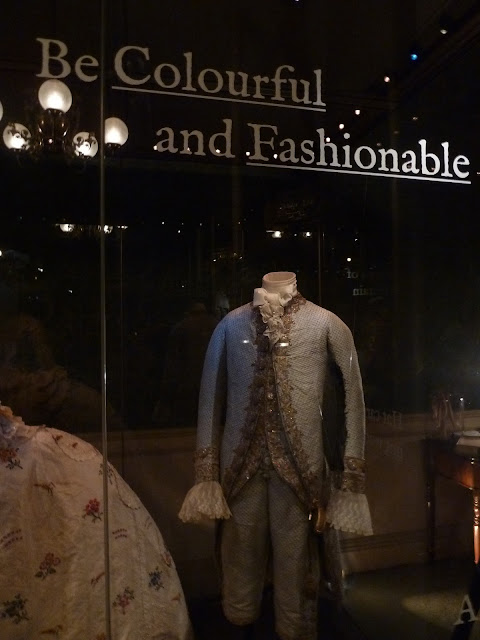 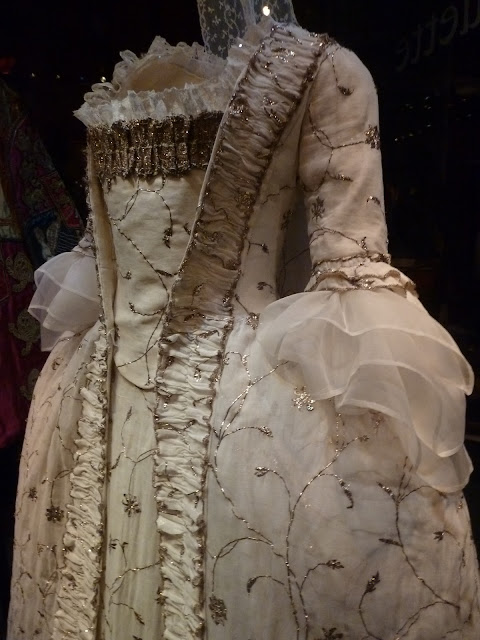 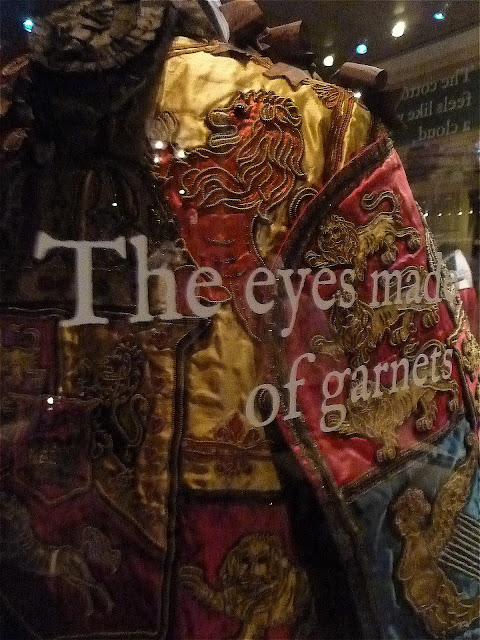 An exhibition on Queen Victoria is also currently on display at the Palace. This traces her life from young queen, through her marriage, children, widowing and major public events both of her reign and in the life of the nation as a whole.

From major events such as the Great Exhibition in 1851, where modern engineering awed crowds with the creation of the Crystal Palace... 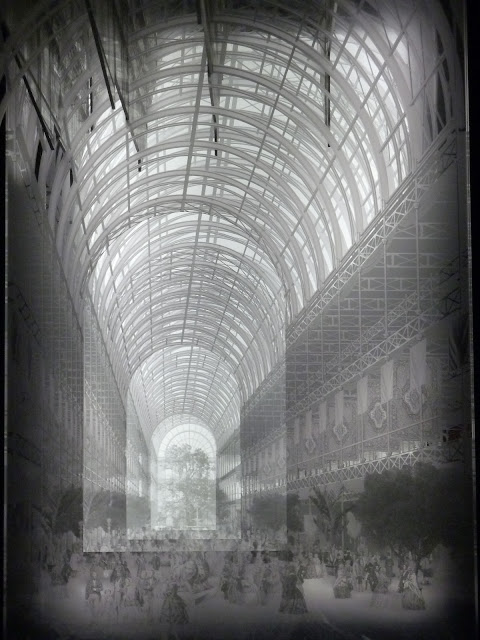 ... to dolls, notebooks, slippers and Albert's... well... I can't even recall what that last item is, but it looks pretty wonderful! 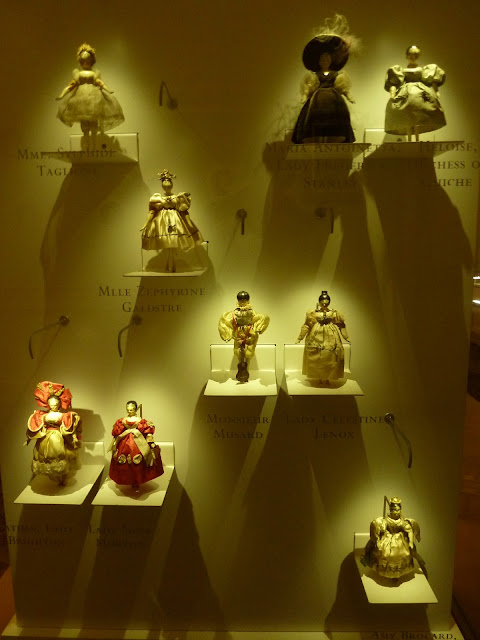 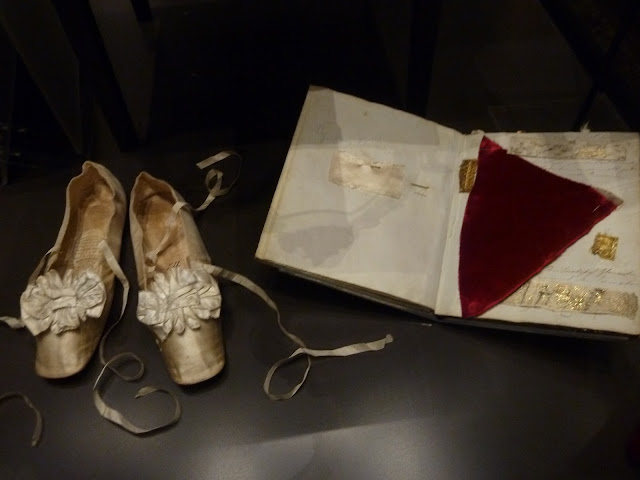 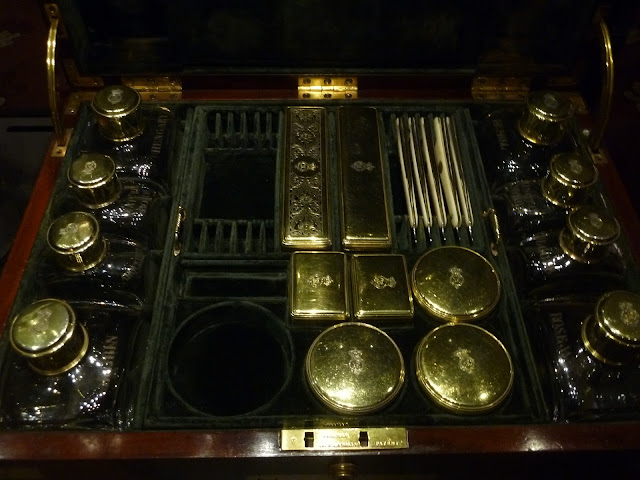 So that's Kensington Palace! If you live in London or if you ever visit, I highly recommend getting lost in the wonder of a day-trip there.
Posted by Miss Marie at 21:06