A Hidden Street Off Piccadilly


Algernon:  Your name isn’t Jack at all; it is Ernest.

Jack:          It isn’t Ernest; it’s Jack.
Algernon: You have always told me it was Ernest. I have introduced you to everyone as Ernest. You answer to the name of Ernest. You look as if your name was Ernest. You are the most earnest-looking person I ever saw in my life. It is perfectly absurd your saying that your name isn’t Ernest. It’s on your cards. Here is one of them: (Reading: ) ‘Mr Ernest Worthing, B4, The Albany, W.’ 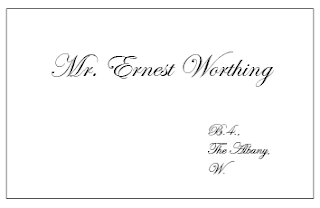 So runs an exchange from Oscar Wilde's classic play, The Importance of Being Earnest. But what is this address, The Albany, of which they speak? Well, it was in Wilde's day, and remains today, just possibly the finest address in London, located right off Piccadilly: 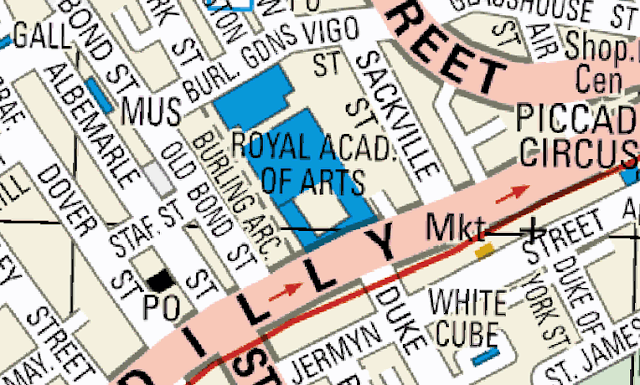 Oh wait, you don't see it marked on the standard street map? That's because it's utterly exclusive. I assure you it exists but you can't always rely on maps: you just need to know it's there. Look again, at this proper old map. It's right there between Sackville Street and Burlington House (or the Royal Academy):


The Albany - or Albany, depending on when you are speaking and how fashionable you are (now, at the beginning of the 21st century, 'Albany', without the definitive article, is de rigeur) - is a series of gentlemen's apartments opening off a private, covered street right in the heart of Mayfair. Albany was created in 1802-03 by the architect Henry Holland, who also built Carlton House, a ridiculously exuberant mansion for the decadent Prince Regent (now sadly demolished). To access the flats (or 'sets', as they are correctly known) of Albany, one passes through what was once Melbourne House, built by the architect Sir William Chambers in 1771-74. Holland also converted this into sets as part of his overall scheme for what is quite possibly the earliest ever example of, let's admit it, bachelor pads - albeit it very, very classy ones.


Last week, my colleagues and I were granted exclusive access to Albany. We got to stroll in a leisurely fashion down the Ropewalk (as the covered street is known), stop in the tranquil gardens and enjoy a drink with one of the residents in his beautifully proportioned, comfortably sized, perfectly maintained set... Is it a little bit obvious to say that I could definitely live there? Oh, and women are allowed to these days, for the record. Although, I have to confess that the traditionalist/misogynist in me does kind of prefer the idea of some of my more stylish male friends living there to me personally doing so... But the other part of me says 'screw tradition - give me a set!'


As you may well imagine, all sorts of fabulous and famous people have lived at this fabulous and famous address, from poet, Lord Byron, to author, Aldous Huxley, from architect of the British Museum, Robert Smirke, to prime minister, William Gladstone. As a self-confessed Oscar Wilde groupie, however, it is still the fact that Albany appears in Earnest that tickles my fancy most. And so, it was with great pleasure that a very dear friend of mine (the perfect Algy) and myself (a questionable Jack) regaled our gathered workmates with a reading from the play at twilight in the garden of the one and only Albany, concluding with the following confession:


Jack:         When one is placed in the position of guardian one has to adopt a very high moral tone on all subjects. It’s one's duty to do so. And as a high moral tone can hardly be said to conduce very much to either one’s health or one’s happiness if carried to excess, in order to get up to town I have always pretended to have a younger brother of the name of Ernest, who lives in the Albany, and gets into the most dreadful scrapes.

Our host and the porter were much amused and invited us back for another recital some other time. I do hope that they meant it...