This morning I went to the Remembrance Service at St Clement Danes, the central church of the Royal Air Force. The original church dates back to before the Domesday Book of 1086 but was rebuilt in the 1680s by Christopher Wren, with the steeple added by James Gibbs in 1719. The reason it is today the church of the RAF is because it was gutted after being hit by an incendiary bomb on 10 May 1941, and after the war it was rebuilt with funds raised by the RAF.

Long-serving readers may recall the post I wrote about my father's parents, who met during World War II, when both served as part of Bomber Command - my grandmother on the ground and my grandfather up in the planes. Although they both thankfully survived the war, it was for this reason that I opted to go to St Clement Danes today.

And it's also the reason that I have collected the two sweetheart brooches below. 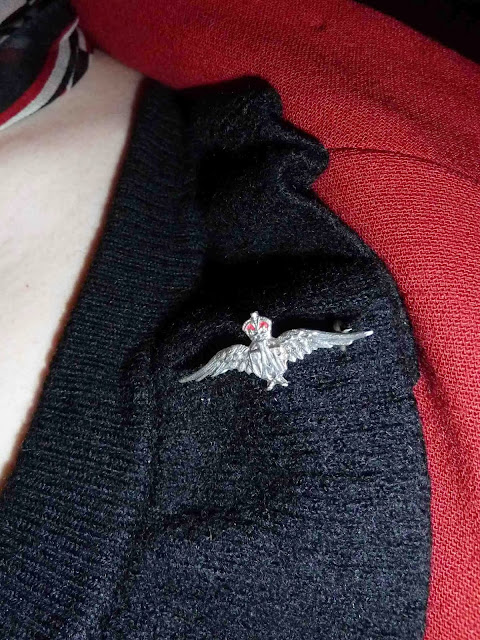 The first (above) was bought shortly after I first read about sweetheart brooches, which were given my servicemen to their girls to wear whilst they were off fighting. The whole concept definitely spoke to my Romantic side and my mid-century interests. As an RAF-granddaughter, I took a particular fancy to the idea of having one representing the air force. So off I went exploring on Ebay, and found the one above. While I was on there, I also saw a wonderful, solid plane figurine, which very much appealled to me but I watched it soar above my budget in a bidding war... Never mind, the one above suited me just fine so I bought it up. It was a time when my grandfather wasn't doing so well, so I liked the idea of being able to pin this onto my jacket as a reminder of him.

That was quite some time ago now. Then about a year ago, on my visit to Australia, I was exploring an antique shop in a county town when I came across this with my mother: 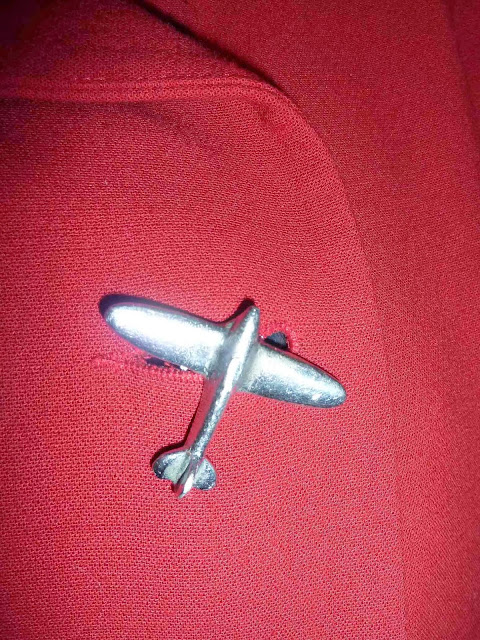 Just like the one I had spotted previously on Ebay but had been completely out of reach! The question of whether it is a Hurricane or a Spitfire is up for debate but, either way, it's just lovely and perfect. (Yes, my grandfather flew a Lancaster but this brooch makes me happy, nevertheless.) My dear mother got it for me as an amazing, treasurable birthday present. For a while it was almost a permanent fixture on one of my favourite jackets but now I wear it more sparingly, after I had a scare with it when it dropped from my jacket. I realised a short while later and thought I'd lost it for good. Thank the heavens and the good people of Carlisle (where the incident occurred), as some stranger had handed it into the staff at a shop I'd been in and I found it held at the Information Desk. I wonder if the person who found it knew what it was or thought it was just some funny little plane? Either way, I almost cried when I realised it was gone, and then again when I safely recovered it... Imagine what it would have been like for a girl who had actually been given a brooch by her sweetheart who was off fighting to lose such a thing. I'm sure one couldn't but think it was a bad omen.

Thankfully, I'm not such a girl and I'm blessed to not be personally affected by war. Instead, I wear my sweetheart brooch in honour of all those from the RAF and other members of the armed forces of this country and others who have died young due to the horrors of war and conflict throughout history.