Halfway Down the Stairs

The Tate Britain re-opened in its full glory today, following a massive refurbishment. Apparently one of the highlights is the new staircase:


And don't we, as a species, just love a good staircase?

What is it about staircases that we find so appealing? Is it simply the graceful sweeping form of a curved stair, and the pleasing angles and geometry of those that are square on plan? Or is the sense of anticipation in not knowing what lies around the next bend or on the next landing? Or is it the underlying feeling of wonder for the mathematics and physics that appeals to us on some subconscious level, even if we aren't engineers? Or it it that slight sense of exhilaration in being able to move across planes and spaces in ways that would not be possible, were it not for these structures?

Whatever the case, I certainly think there is something more profound than pure aesthetics that gives us a sense of awe and great pleasure on encountering a particularly noteworthy, or even a relatively average staircase.


And that, my dear readers, is what I call a tangent - from a gallery re-opening to waxing philosophical about staircases. Though I did manage to draw it back to art with Escher there.

But do pitch in, what is your favourite staircase? Is it a simple stone medieval spiral staircase? A sweeping marble Baroque palace staircase, with ornate gilded balusters? A clean white, sleekly formed Modernist staircase? Or is it something more humble, like your carpeted, timber staircase at home?

With that last thought, let me leave you with an old favourite poem, which might indeed say a little more about the simple appeal of staircases: 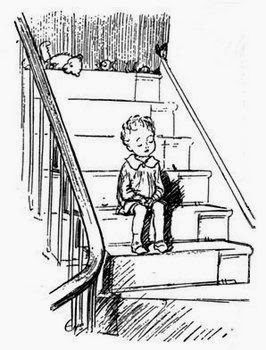 Halfway up the stairs
isn't up
and it isn't down.
It isn't in the nursery,
it isn't in town.
And all sorts of funny thoughts
run round my head.
It isn't really
anywhere!
It's somewhere else
instead!