It's the first day of September! 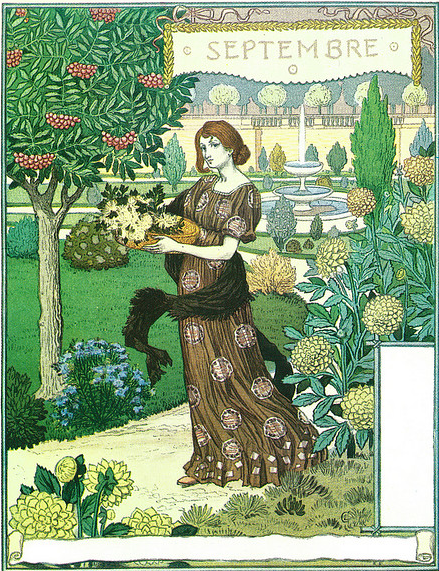 I do love autumn, so the arrival of September pleases me somewhat.  And I'm celebrating by sharing this lovely personification of the month with you, my lovely readers.

I picked up a postcard of this image when I was in Dresden last year (a love letter from Germany?).  The artist is Eugene Grasset and it's part of a series called La Belle Jardiniere which follows a garden through all the months of the year.  Grasset was a Swiss graphic designer who lived from 1845 to 1911 and was known for producing posters in Art Noveau style.

His ladies for all months and seasons delighted me when I stumbled upon them.  I do adore seasonal and monthly personifications and symbolism.  You find them in architecture, fine arts and decorative arts right through the ages and it always gives me great pleasure perusing the different interpretations that have been made of nature and human occupations and celebrations through the year.  Similarly, I love it when the same is done with the elements, the Continents and for arts, sciences, etc.  I enjoy trying to identify which is which based on the symbolisms and other visual representations used.

As these things don't stand nearly so well on their own, I'm going to go beyond September and give you Grasset's three ladies for the autumn months.  I considered posting the whole year but decided it would be nicer to split it up into quarters instead so that each season can be appreciated separately.  Hopefully, I will remember to return with the next installments in December, March and June...

But for now, I hope you will delight in comparing the pictures - watching the changes in flora, in the gardeners' duties, in colours, in light, in ambiance and, rather cleverly, the use of the Zodiac symbols in the dress patterns! 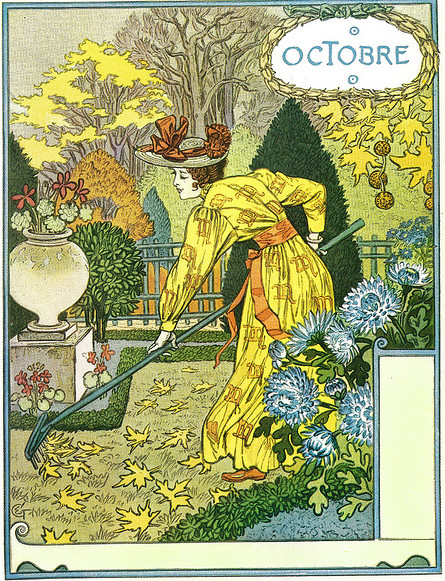 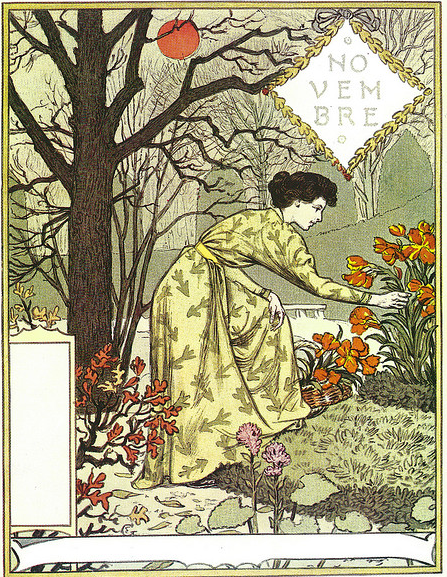