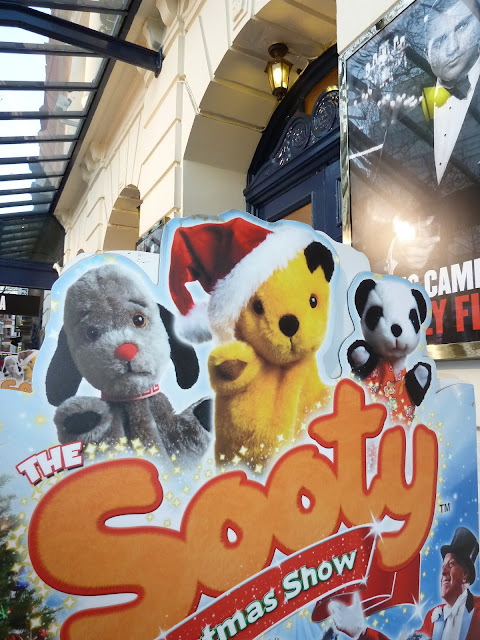 Last Sunday, my mum, my sister, The Cat and I all went off to see The Sooty Christmas Show at the Garrick Theatre.  I thought this merited a mention on here because (a) we all had a good old-fashioned fun time and (b) the show is, when you think about it, a vintage gem and classic. 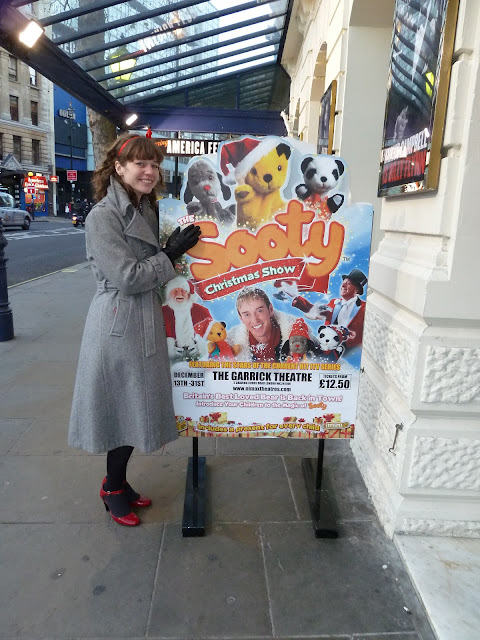 I will transcribe for you the brief history of The Sooty Show as included on the label of the Sweep puppets my sister and I purchased (because, as anyone who's anyone knows, Sweep is totally cool):

In July 1948 Harry Corbett was on holiday with his wife, Marjorie, and children, David and Matthew.  While walking on The North Pier, Harry spotted a teddy bear puppet in a gift shop.  For the pricely sum of 7s6d, Harry purchased the little bear and introduced his new partner into his amateur magic act.  Such was his success, a BBC TV producer asked Harry to make an appearance on screen.  Sooty's antics instantly captivated the nation and won him a place in television history,  New members joined the Sooty family including the lovable spaniel Sweep and Soo the helpful panda.  In 1976, Harry's son Matthew took over as Sooty's right hand man, followed in 2000 by Richard Cadell.

Of course, being a child of the 80s, it's Matthew Corbett's guardianship of the three puppets that I remember.  So I'll leave you with a classic 80s scene.