Darn it!  I didn't make it onto the Grazia website's Style Hunter page...  I guess finger-crossing didn't help.  Oh well, it was amusing to be snapped by their roaming photographers nonetheless.  And overall I think those girls that did make it onto the website looked pretty spiffing - I especially love Sophie's dress.  Though I have to confess that I don't get the 70s thing at all...  But I do think it's nice that the judges seem to have gone for a mix of styles and periods.

Anyway, I did snap some pictures of my own for an outfit post, but they're hidden away inside my handy disposable camera at the moment (no, I've not got a proper replacement for my Pimms-drowned camera yet).  In the meantime, here's one my friend took on her iphone... 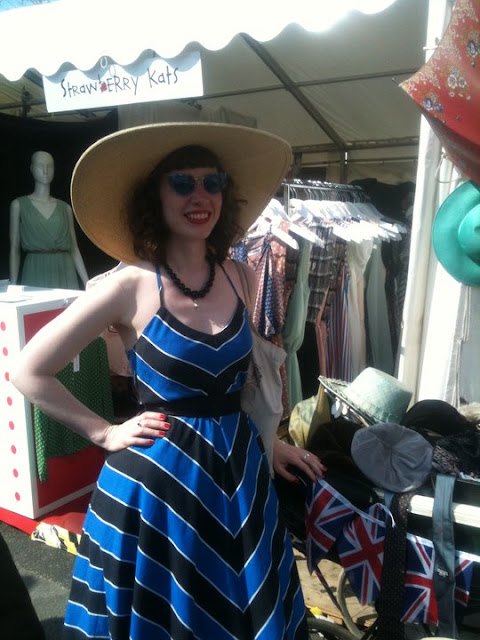 I'm looking rather pleased because I'd just bought the glasses at this point, which happened to go perfectly with my outfit.  They're a bit mad, and perhaps not to everyone's taste (including The Cat's) but I just thought they were wonderfully quirky.  And really, can you blame me for not being able to resist when they complemented my '50s-style dress so well, both in colour and era??  I wonder if I would have gotten plus or minus points if I'd had them on at the time Grazia snapped me...?

I won't tell you about my other purchases just now as I'd rather wait until I can show you pictures of them.  In that case, perhaps I should stop blogging and get onto buying a new camera!

But I will just say that an excellent time was had last weekend down at Southbank for the Vintage Festival.  I had been intending to go to the ticketed event before discovering that there was a whole lot of free stuff going on by the river-front.  A skint friend talked me out of paying for a pass to Royal Festival Hall, and a group of us just browsed the "Vintage High Street" instead.  There was a good range of items and prices, and we had a lovely day browsing (with occasional purchases), people-watching, and finishing up with cream tea in the pretty refreshments tent.  The definite advantage of not paying £60 for a ticket meant that there was more money to go towards taking home permanent goodies, rather than mere fleeting entertainments!  But as I said, more on those "permanent goodies" at some later date...
Posted by Miss Marie at 20:17