The Vintage Festival at Southbank!  Okay, I know that a lot of people had a disappointing day but I was fortunate enough to have a friend who was too skint for the main event and talked me out of buying a ticket so I could just spend a day in the free parts with her.  I had been slightly skeptical about whether the events in the Royal Festival Hall would really be worth the cost of the ticket anyway and, from reports here in blogland, it sounds like I was right to be so.
The publicly-accessible Vintage High Street, however, amounted to a really enjoyable day.  My date had grown to be a wee bevy of girls by the time the vintage weekend swung around and we all headed down for a girly day of browsing lovely stalls, sustained by ice lollies and cream teas.  Some of us bought more, some of us bought less, some of us bought none but all of us were happy exploring.
I (surprise, surprise) was one of those who bought.  Though it's a little late after the date, I've got my hands on a camera after ages without one, so I thought I'd share my finds with my readers as I was quite happy with the little stash I brought home.  It felt like a well-rounded little bundle of variety - a change from my tendency to bring home more and more dresses to my already over-flowing abundance of said clothing item.  So, without further ado...
Item 1 and 2 - white lacy gloves and blue turban: 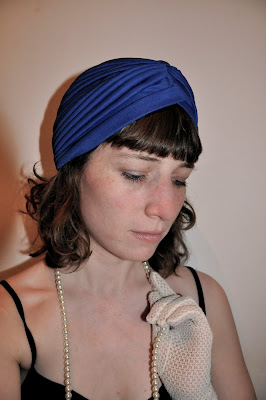 I have several pairs of warm winter gloves and I have satiny evening gloves, but I don't have any gloves for daywear - you know, to sass up a pretty little dress whilst just out and about, as opposed to out on the town.  I thought these were lovely for that purpose and fitted, well, you know, like a glove. £3 - sold!

The turban, I didn't expect to like on me at all but one of my friends encouraged me to try it on.  It was love at first sight when I looked in the mirror!  I somehow thought it would work best on straight hair but I love the way my curls poke out from under it.  I might have to start keeping my eye out for a proper vintage one as this is a rather cheap, nasty fabric but it does the trick for now! 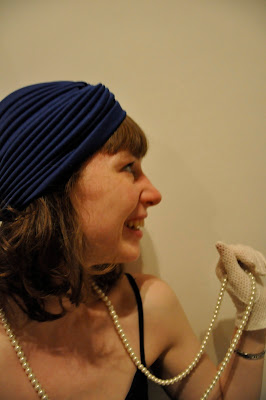 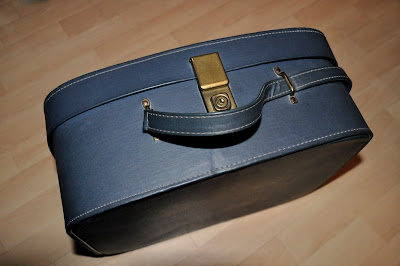 Luggage/an overnight bag was on my list of items for which to keep an eye out when I arrived at the Festival.  The other was furnishings of the non-essential but handy kind (e.g. coffee tables, side cupboards, that kind of thing).  I didn't end up with furniture, though I did drool over a 1930s "tub chair" which was super-comfy, upholstered in lush deep red fabric and had cute, itsy-bitsy legs so was awfully sweet and low.  But that was in one of the pricy stalls and though I did seriously consider it, I opted against it in the end.  I also eyed off a 1960s record cabinet for a little while but one of my friends was more committed to it and she got to take it home instead.  I somewhat regretted letting her take it afterwards!
But, I digress.  Back to the vanity case.  I checked out a few - some bigger, some smaller, one with decoupage on it and all the little bottles inside which was absolutely darling but damn heavy even with nothing in it.  This one I felt struck the right balance of size, weight and durability. 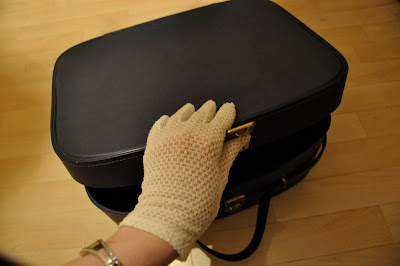 Plus it has sweet checks inside: 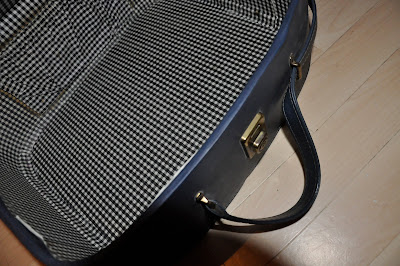 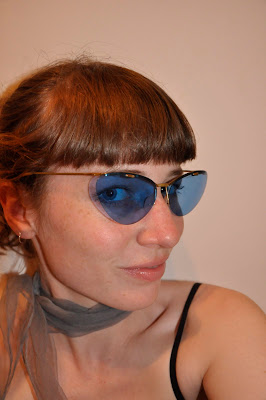 Well, I already mentioned these in my other brief post about the day but they are so damn cool that I thought they deserved their own close-up.  I'm really not sure how often I'll actually wear them but I couldn't resist.  I am hoping I'll find occasions and outfits for them, despite them being a tad tricky.  Anyway, they fitted in with my blue theme for the day so it was clearly meant to be...
So, that's my well-rounded stash from last month's Vintage Festival at Southbank.  But I do have to confess that I did end up with a dress as well...  Only right at the end of the day.  I'd almost made it out without buying one, the stalls were packing up, we were leaving, but I then found a lovely one in the last place we looked, just after I'd been commenting on my self-discipline in not buying one.  Spoke too soon!  Might share it some other time though as it needs a tiny bit of taking in.  It's going to be a good autumn/winter dress though so do keep your eyes peeled for an appearance in a future outfit post.  And rest assured, I stuck to my theme - it is blue!
Anyone else found any not-strictly-clothing vintage items recently?  Accessories?  Furniture?  Luggage items??
Posted by Miss Marie at 23:20