Royal Festival Hall and the Museum of 51 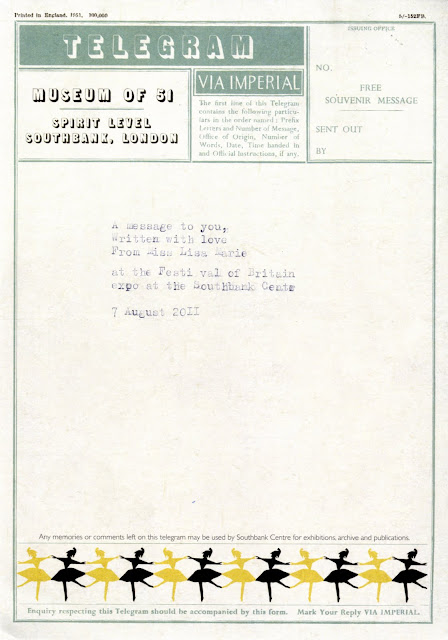 Last weekend I went to the Museum of 51 at Royal Festival Hall, which is part of the 60th anniversary celebrations for the Festival of Britain.  Oooh, it was wonderful!  I recommend that everyone who can get there does so before it closes at the beginning of September.  It won't even cost you a penny - it's absolutely free!

I can't share pictures of the exhibits with you because I was sans camera but I can share this video which I watched with delight and was terribly pleased to find available on YouTube when I got home.  It's fairly long but if you're interested in mid-century architecture, design and spacial planning, then you should absolutely set aside some time to watch it.  Even if you're not, it's got that wonderful 1950s documentary style that just makes everything seem quaint and fascinating.

After the film finished, I pulled out a notebook to jot down some of the most interesting points from the video (yes, I'm like that) - the British not liking rhetoric in their buildings and the festival site's embracing of intimate rather than grand spaces; the subtle methods used to distinguish but also connect spaces in the festival buildings; the surprise and interest created by levels and textures and corners; landscapes coming into buildings and buildings projecting over landscapes; platforms over the Thames to connect Londoners back to the river, etc, etc.

As I wrote desperately, trying to remember all the key points that had grabbed me, the chap who had been sat near me during the film approached me and asked if I had dressed up in 1950s style to come to the exhibition.  Stunned for a second (partly because my ensemble was really more 1940s...), I responded with something along the lines, "Um.  Oh!  I guess...  Well, I just wear this kind of thing most of the time."  He was pleasantly intrigued by this and said something nice about my outfit and then walked off to let me finish my note-taking.  I like it when people are pleasantly intrigued by my style and politely ask about it but I never know what to say!  I need to come up with a simpler response to the garbled ones I usually give...  When someone asks of my outfit "Is that 1950s?" and they're some older chap, I have to remember that they probably aren't interrogating me about whether my dress is of genuine vintage but are rather just curious and asking about the overall look and inspiration!

But enough of me and back to the exhibition.  Just to sell it further, there was wonderful memorabilia to examine, including - possibly my favourite - little cards which said "Festival of Britain visitor" (or some such) with a space to insert your photo.  Oh, how I would love one of those!  There were architectural drawings for the buildings and site, sketch designs for the logo, a replica 1950s room where you could lounge on a sofa and flip through a scrap book of newspaper cuttings with period music playing (though, unfortunately, I quickly learnt as I sat there reading newspaper cuttings that it was just the one song on repeat), an old typewriter where you could type your telegramme (see above), guidelines for the unifying festival font, pretty printed silk scarfs, and lots more!

The final delightful thing to mention is the wonderful Patchwork of the Century.


This covers the hundred years from the Great Exhibition of 1851 through to the Festival of Britain in 1951 and was made by a group of women with no prior experience of needlework, led by one Lilian Dring.  It was created from scraps of material such as uniforms and blackout curtains left over from the war.  There is a bit more information about it on this web page.

As I stood there examining it, trying to work out what each square represented (there is a "cheat sheet" for those not up to the challenge, or for when you give up), I thought what fun it would be to create a patchwork from 1951 to 2011!  What would I choose for each square?  What event or person defined Britain in each of those 60 years.  I wondered idly if I could convince any fellow bloggers to join me on a quest to gather a large enough group of keen amateurs to tackle 60 patchwork squares...  Just idly wondering...
Posted by Miss Marie at 00:27